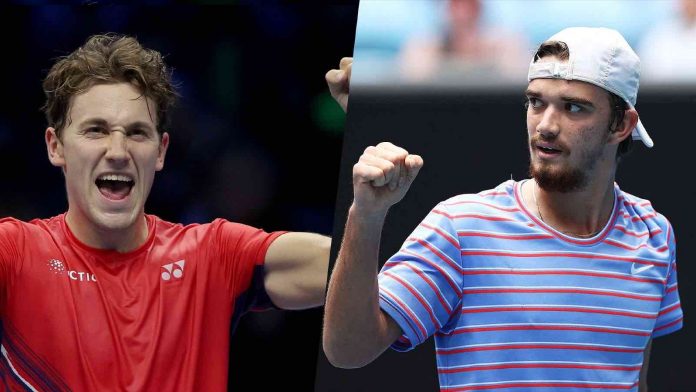 In the opening round of the Australian Open, Tomas Machac of the Czech Republic will compete against second seed Casper Ruud.

Ruud began the 2023 campaign when playing for Norway at the United Cup. He defeated Thiago Monteiro 6-3, 6-2 in his opening singles encounter before falling to Matteo Berrettini 6-4, 6-4. The 24-year-old then received a bye to the second round of the ASB Classic since he was the top seed, where he met Laslo Djere. Ruud took the first set 6-3, but the Serb came back to take the following two 6-3, 7-6(3), securing his spot in the quarterfinals.

Last season, Machac predominantly participated on the ATP Challenger Tour, where he took four of nine matches. The Czech Republic began the 2023 campaign in the Adelaide International 2 qualifying rounds. He defeated Oscar Otte and Kwon Soon-woo to advance to the competition’s main draw. In the opening round of the Adelaide International, Machac was matched up against the South Korean, but the latter prevailed by scores of 6-4, 6-4.

Ruud has outstanding defensive abilities, but during the past year, his game has also become more attacking. The Norwegian will attempt to take use of his strong forehand. Additionally, he possesses a strong serve that might get him some unearned points. Machac will try to maximise his service games while pursuing the sporadic big break. Additionally, the Czech possesses a respectable return game, which may be useful to him. If he wants to surprise Ruud, he must perform at his highest level. Despite the Norwegian’s recent losses, he should be able to easily defeat Machac and advance to the next round.