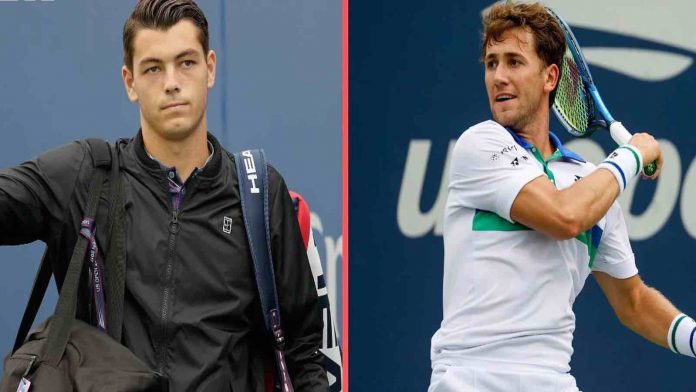 On Sunday at the 2022 Laver Cup, the second-ranked player in the world, Casper Ruud, will play the 12th-ranked player, Taylor Fritz, in the fourth match of the third day.

In a match that lasted an hour and 49 minutes, the Norwegian player defeated Sock 6-4, 5-7, 10-7. This victory propelled him up to the second position in the world rankings. Ruud gained an early advantage and, after failing to serve the first set out at 5-3, managed to break his opponent back to win the opening frame. In the second set, Sock responded with a late break, but more crucially, Ruud was unable to break his lower-ranked opponent’s serve at any point. The two players battled it out until the score was tied at 3-3 in the match tiebreaker before Ruud gained control and easily won the contest.

On the second day of the competition, Fritz provided Team World with their lone victory by outdueling Cameron Norrie in a hard-fought triumph. Because Fritz never fully controlled the match tiebreaker but maintained a little lead throughout the third set, the American triumphed 6-1, 4-6, 10-8 in a match that might have gone either way until the very end. In fact, it took Norrie making two more unforced errors in the match tie-breaker at 8-8 to tip the balance in Fritz’s favour. Fritz had lost twice in his previous three Davis Cup games, including a defeat to Norrie, but he was able to avenge that loss.

Given that Fritz has performed well on this surface overall, and Ruud has recently demonstrated his abilities on hard courts, this is an intriguing matchup. Ruud’s lack of indoor expertise could work against him, and if this match does take place, Fritz is likely to prevail.