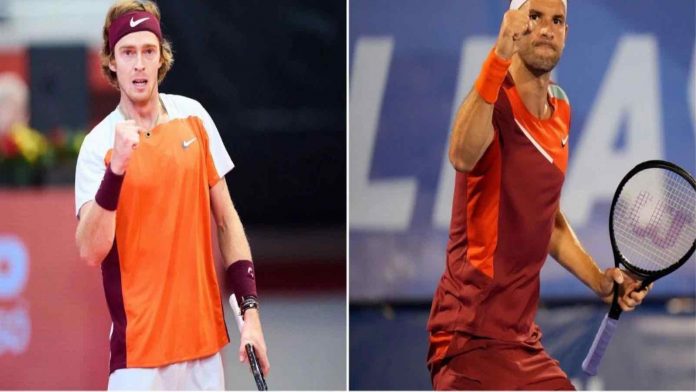 In the 2022 Erste Bank Open’s second round on Thursday, World No. 32 Grigor Dimitrov will face off against third seed Andrey Rublev.

Diego Schwartzman was Rublev’s opponent in the opening round. He quickly built a 3-1 lead and secured a break in the opening set. In the ninth game, he had a several set points on his opponent’s serve but couldn’t win the match. At 5-4, the Russian moved up to serve the match, but he first had to hold off three break points. Eventually, on his third set point, he was able to secure the opening game. Rublev won the second set with just one point lost to take the match 6-4, 6-1. The first set was quite evenly contested.

In this first round, qualifier Thiago Monteiro was paired up with Grigor Dimitrov. The first to score in the first set was the Bulgarian, who went up 3-0. He didn’t blow the lead and was able to serve the set out without incident to win it. It proceeded similarly in the second set. To go up 3-1, Dimitrov successfully broke the serve early. Despite his best efforts, Monteiro was unable to enter the game in any meaningful way. Dimitrov simply maintained the lead he had established early on and quickly completed the match to win 6-3, 6-4 and snap a three-match losing streak.

In their previous five encounters, Rublev held a 3-2 advantage over Dimitrov. At the Indian Wells Masters in 2022, the Russian triumphed in their prior match in straight sets.

The Russian’s game might start to falter a little bit if Dimitrov can effectively rally with him and put him on the defensive. The World No. 8 is currently playing fairly well, and despite some ups and downs, he has managed to win his most recent matches. Ultimately, Rublev is probably going to hold up against Dimitrov’s challenge and carry on with his campaign in Vienna.