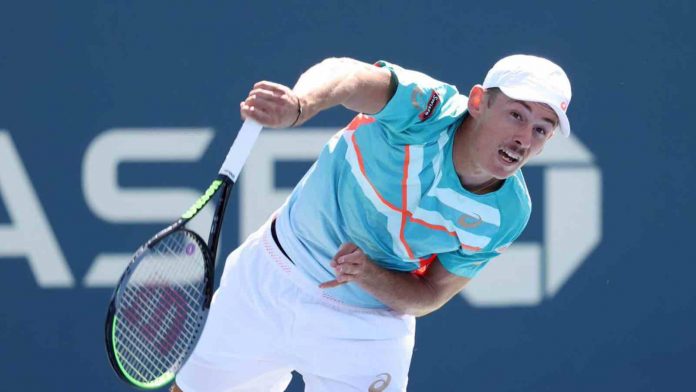 On October 20, the Australian fifth seed Alex de Minaur will play the American J.J. Wolf in the second round of the 2022 Stockholm Open.

23 in the world On Tuesday, Alex de Minaur defeated Benjamin Bonzi in straight sets in just one hour and sixteen minutes. The Australian was in control the entire game. He won 6-3, 6-1 without encountering a single break point and broke Bonzi twice in each set. De Minaur increased his season record to 41-21 by winning his sixth career title and the first of the year at the Atlanta Open. Among his other achievements this year were his first-ever appearances in the fourth round of the Australian Open and Wimbledon, as well as semifinal appearances at Barcelona, Lyon, and Eastbourne.

J.J. Wolf made a strong start in Stockhom by defeating Alex Molcan in straight sets in the opening round on Wednesday. This came after a remarkable performance in Florence last week that saw him reach his first ATP final. The 23-year-old, who last week rose 19 spots to a career-high rating of no. 56, took an hour and 45 minutes to defeat the Slovakian. Following an early break loss, Wolf recovered to lead by a set to love in the first set’s final game. The world number 47 broke early in the second set as well, leading 3-4, but the American came back, winning three straight games to win the match 7-5, 6-4.

Wolf’s present performance notwithstanding, De Minaur is the favourite to win the match. He is the more accomplished of the two, both in terms of past performances and level of experience. Wolf might make a challenge, but the Australian should prevail. His 25th victory on hard courts this year came on Tuesday. He enjoys playing on this surface, and it was where he turned in his greatest performance of the year, defeating Jenson Brooksby to win the Atlanta Open for the second time. De Minaur has been playing well lately, and in 2022, the World No. 23 is anticipated to make it to the quarterfinals six times.