Bhagath Verma, the 22-year all-rounder from Hyderabad has been the part of CSK side for the 2021 IPL season. He was picked by the Chennai-based side on his base price.

Bhagath was born on 21st September 1998 in Hyderabad. 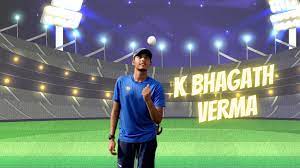 He is a right-hand batsman who can play all the shots. He has a nice and stable stance at the crease with the bat in hand, then he has a slight back and across moment which is his trigger moment. Just before hitting the ball, he has a higher backlift.

In the 2016-17 season, he took 35 wickets in mere six games in Cooch Behar Trophy which helped him to get a maiden call for India’s U-19 squad touring England for two Tests and five 50 over games. With those 35 wickets, he finished as the 5th highest wicket-taker from the Cooch Bihar Trophy.

He hasn’t yet played in any senior team but has done well in his U-23 team named West Godavari U-23.

His Stats For Godavari U-23