Krishna Nagar wins gold by defeating Hong Kong’s Chu Man Kai in a marathon match that lasted about an hour.

Krishna was surprisingly trailing in the opening game by four-point. 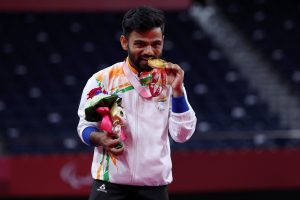 But the Indian regained his composure and stitched a flurry of points to stun his opponent as he took the first weel-fought first game.

In the second game, Chu Man Kai came out all guns blazing as he knew that this was his last chance to have a hot at the yellow metal.

Chu found ways to trouble the much-fancied Indian as Krishna found himself in a tangle at multiple [points in this game. However, Krishna matched his opponent’s point with point, it was only at the business end of the game that Kai chipped away with crucial points to take the match to a mouth-watering decider.

The third game, as expected was a really tight one. At the halfway point it was Krishna who lead by four points but Kai came back well and leveled the score at 14-14.

Krishna pulled away again and had the chance to seal the deal with 5 gold medal points. He laid his hands on the gold medal in the second go itself.