Indian paddler Bhavina Patel proceeded to the knockout stages in the women singles Class 4 as she beat Britain’s Megan Shackleton. The scoreline read 3-1 at the end of the match. 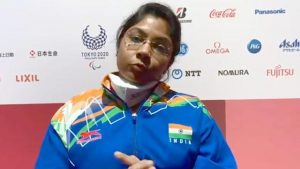 Bhavina will now be facing the world no.8 Brazillian Joyce Oliviera in the round of 16. If she manages to beat Oliviera she’ll have an even tougher opponent in the defending champion Rankovic Peric of Serbia.

The Indian knew that this was her last chance to make her trip to Tokyo count and she didn’t disappoint. She came out all guns blazing and blew away Megan in the first game which lasted only 8 minutes.

In the second game, Megan showed her mettle and clawed her way back into the contest by winning the set. With the game interestingly poised at 1-1 the match was destined for a photo finish. The third game lived up to its expectation as it seemed like an indefinite see-saw battle between two great tacticians. Finally, it ended in the favor of the Indian as she won the set 17-15.

Megan looked dominant throughout In the fourth set and the match seemed to be headed towards a decider. But, Bhavina clawed back from 7-10 down and eventually sealed the deal by winning the fourth set too by a scoreline of 13-11.