Top 5 umpires with most matches 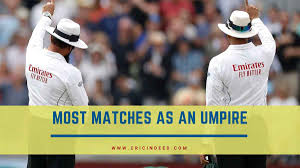 Every sport necessitates using an umpire or referee to enforce the rules and ensure that the game is performed in the proper spirit; cricket is no exception. In cricket, an umpire represents the official team responsible for making critical judgments during a match. The decision of the umpire is definitive on the field. An umpire also verifies that the equipment utilised and the competition circumstances are fair and adhere to the game’s regulations. During the commencement of a cricket match, umpires are the first to walk onto the ground, even before the players. Umpiring is one of the essential perspectives of any sport. In this article, we will have a look at the Top 5 umpires with most matches.

Top 5 umpires with most matches

David Shepherd was a well-known international umpire who refereed in 172 One-Day Internationals and 92 Tests between 1983 and 2005, including three successive World Cup finals. His roly-poly demeanour, lighthearted attitude to refereeing, and odd habits – most notably his ‘jig’ when scores hit 111 or a multiple thereof – earned him a fan favourite among players and fans worldwide.

Daryl Harper, a former primary school teacher, played grade cricket in Adelaide before switching to umpiring. In 1987, he became a first-class umpire for the first time. In 1994, he was selected for his first One-Day International, and in 1998, he was chosen for his first Test match. He became part of the Elite Umpires Panel in 2002. He was also considered a less contentious pick than fellow Australian umpire Darrell Hair. In July 2011, his contract came to an end, and the ICC announced that he would be stepping down.

He began working as an ICC umpire full-time in 1997 and was one of the founding members of the Emirates ICC Elite umpire panel in 2002. In September 1999, he refused for a bribe before the Coca-Cola Cup final. Four months later, he was at the epicentre of the match-fixing crisis, this time as a stand-in for South Africa in the now-infamous Centurion Test between South Africa and England.

The Most Honorable Steve Bucknor, a former international cricket umpire, is sometimes known as Stephen Anthony Bucknor OJ. On May 31, 1946, he was born in Montego Bay, Jamaica. Before becoming an international football referee and cricket umpire, he taught high school mathematics and coached sports. He was given the Order of Jamaica, Commander Class, in October 2007 for “exceptional achievements in the realm of sports.”

Not only has Aleem Dar won the ICC Umpire of the Year Award three times (from 2009 to 2011), but he has also officiated in the most international matches. His rise to the highest level was extraordinary, especially given that Pakistan has never known for generating world-class umpires. If fact, most of them have made headlines for the wrong reasons, from Idris Begh to Khizer Hayat to Shakoor Rana to Javed Akhtar to Asad Rauf. Overseas cricketers’ complaints grew so common that Imran Khan mandated independent umpires in home Tests.