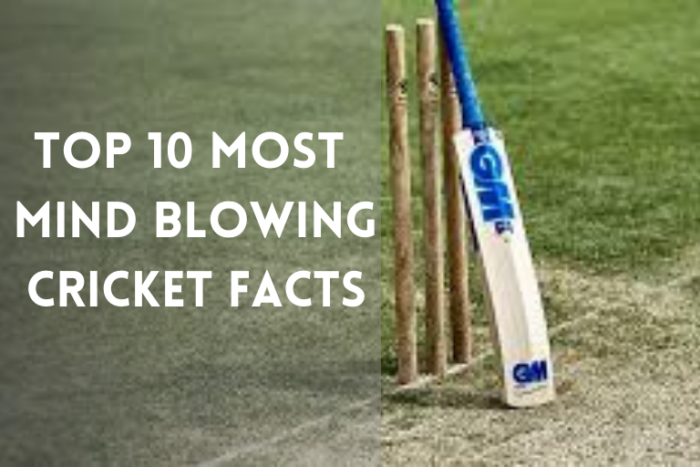 The history of cricket is centuries old. There are many rules and incidents that happened in the game and come as a bolt from the blue for the readers. Records are meant to be broken, but apart from breaking records, there are some things that you may find unique. In this article, we list the top 10 most mind-blowing cricket facts.

Cricket has also been played once in Olympics

Pataudi played test matches for both India and England

On hearing the name of Nawab Pataudi, Indian cricketers remember the father of actor Saif Ali Khan and the legendary batsman of his time, Nawab Mansoor Ali Khan Pataudi. Pataudi, popularly known as Tiger, has also been the youngest captain of the Indian team. But here we are not talking about him but his father Nawab Iftikhar Ali Khan Pataudi, who played Test cricket for both India and England.

He made it to the England team for the famous ‘Bodyline’ series of 1932–33 and scored a century in his very first Test match at Sydney. But he was dropped from the England team forever after the second test match. Experts say that he objected to Douglas Jardin’s bodyline strategy, which offended Jardin. After this, Iftikhar, popularly known as Bade Nawab Pataudi, captained the Indian cricket team on the 1946 tour of England. He played a total of 6 test matches.

Ashes Trophy contains the ashes of the stump

The Ashes trophy is given to the winning team for the Test series between England and Australia. Although it is a big trophy, but inside it is a very small wooden trophy, which contains some ash under its lid. This is the ashes of a cricket stump. Notably, Australia defeated England by 7 runs in a Test match on August 29, 1882, at the Kennington Oval in London and won their first victory on their soil.

Saddened by this defeat, sports journalist Shirley Brooks of the Sporting Times newspaper put the headline of the death of English cricket on his news and said that the ashes would be sent to Australia after the funeral. It was from this heading that the word Ashes emerged and a stump of that Test match was burnt and it was filled in the Ashes urn as symbolic ashes.

The law of pitch length has never changed

The ODI format never really freed from the hangover of Test for years. This strategy of all the teams used to be that by playing the new ball carefully, its swing should be taken away. One day cricket went on for years on almost the same lines. Then came Jayasuriya And he changed the face of this game. He was the one who told the world and showed how to bat swiftly and fearlessly in the opening overs. But this explosive batter has more ODI wickets than the legendary leggie Shane Warne.

With the magic of the wrist, Warne trapped almost all the veterans of his time in the web of his spin. Warne took 708 wickets in his 145-match Test career, the second-highest in Test cricket after Muttiah Muralitharan. Markedly, while Warne has 293 scalps to his name in ODI, Jayasuriya has 323 wickets in ODI.

England is globally acknowledged as the father of cricket. And Lord’s Cricket Stadium is recognized as the Mecca of Cricket. The 200+ years old aesthetically built stadium never ceases to wow fans and players with its beauty. The home of cricket hosted its first ODI back in 1972 and till then it has hosted only 56 ODIs. The flabbergasting fact is that the 2006 built Sher-e-Bangla stadium of Mirpur has hosted a total of 113 ODIs.

Bapu Nadkarni was an Indian left-arm spinner and middle-order batsman. He has a charismatic record to his name. Bapu had made a record of bowling 21 consecutive maiden overs in a Test match against England, which has been held in his name for 54 years till date. And it seems unrealistic to outdo this record in today’s quick-paced cricket. Nadkarni was such a bowler who was considered very stingy in terms of giving away runs. He bowled 21 consecutive maidens in the Madras Test against England in 1966. The analysis of his bowling in this Test innings was 32 overs, 27 maidens, and five runs, although he did not get a single wicket in this innings. His economy rate was a mere 0.15 runs per over.

If there has been one Indian batsman in the past who has changed the landscape of Indian cricket with his game of cricket, there is no doubt that it would be the great Sunil Gavaskar. From scoring 700-plus runs in his first series to being the first batsman to score 10,000 runs in Test cricket, Sunil Gavaskar played a huge role in bringing himself and the country’s name to the top of the cricketing world. However, he holds an opprobrious inning to his name.

Chasing 335 runs in the first-ever Prudential Cup in 1975, Gavaskar played the most embarrassing ODI inning ever. India opened their innings with Sunil Gavaskar and Eknath Solkar. Both got India off to a very slow start, but India needed a quick start. India scored a total of 132/3 in 60 overs. Indian team lost this match by a margin of 202 runs. The most surprising thing in this match was that despite playing 174 balls, Sunil Gavaskar scored only 36 runs and remained unbeaten. He hit only one boundary in this innings. His strike rate was 20.69. This was the slowest innings of ODI cricket till date.

Also Read: List of players who played for Two Countries in Cricket

One of the greatest fast bowlers ever Wasim Akram has the highest Test score greater than the God of Cricket himself. Yes, that’s right. Interestingly, the king of Reverse Swing, also has a double century to his name. He played a memorable inning of 257 not out against Zimbabwe back in 1996. While the little master never crossed the magical number of 250 runs in his career. His highest score came in the 2004-05 India tour of Bangladesh where he scored 248 not out.

Have you ever seen a bowler taking a wicket without even bowling a bowl? Not possible, right? But it is possible to take a wicket without bowling a legitimate delivery. Virat Kohli holds a unique world record in bowling in T20 Internationals and finds a place in the top 10 most mind blowing cricket facts.

In 2011, when India went on a tour of England, a T20 series was also played between the two teams. Virat Kohli achieved this rare feat of taking a wicket in 0th during that series. He dismissed Kevin Pietersen before bowling a valid ball in the T20I played in Manchester on 31 August 2011. Kohli got the wicket on the ball, which the umpire did not consider valid. It was a wide ball and Pietersen returned to the pavilion after being stumped. This was the first time in T20 International cricket when a bowler took a wicket before bowling the first valid ball.