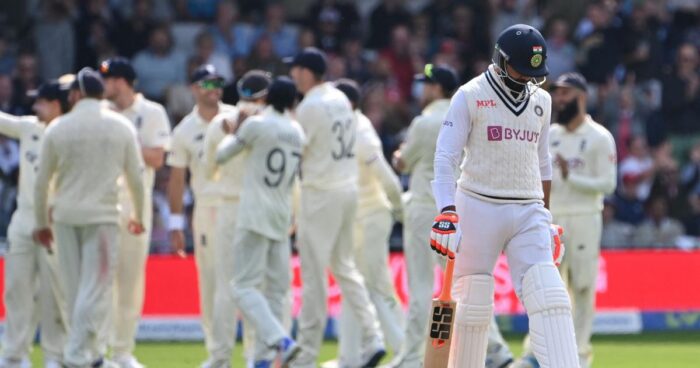 Ever since India took its first steps in Test cricket, some 8 decades ago, the nation is known as a batting powerhouse. Indian cricket has produced numerous sheer classic batters. It is a fact that the country has seen more than its share of batting legends. From Vijay Hazare, Polly Umrigar to Sunil Gavaskar, Mohammad Azharuddin to Sachin Tendulkar, Rahul Dravid, and now over to Virat Kohli, Rohit Sharma. This list can continue till eternity. The focus has been so abundant around batting that it is arduous for anybody to recollect great Indian test bowlers – at least until the Indian spin quartet delighted Indian fans with their skills and ability to out-think the batsmen in the 1960s and after era. The Indian batting collapses are a once-in-a-blue-moon debacle. In this feature, we take a look at the top five lowest scores by India in Tests of all time.

At fifth on the list of top five lowest scores by India in Tests of all time is India’s 66 all-out against the Proteas. India played South Africa in the pace-friendly conditions of Durban in 1996. Sachin Tendulkar was the captain of the team which could boast of his glorious batting lineup. India won the toss and decided to bowl first. The pitch provided excessive bounce as well as movement off the seam. India bowled well and South Africa could only score 235 runs in the first inning with the help of Andrew Hudson’s 80. Venkatesh Prasad starred with the ball and grabbed a fifer. In response, the Indian batting collapsed in front of the wreaking bowling of Allan Donald (5/40) and could manage only 100. None of the batters crossed the 20 run mark.

After a massive first-innings lead of 135 runs, South Africa scored 259 runs in the second innings on the back of half-centuries from Andrew Hudson (52), Adam Becher (55), and Brian McMillan (51 not out) to give India a mammoth target of 395 to win. The Indian team proved to be more laggy in the second innings and was all out for just 66 runs. Rahul Dravid top-scored with 27 runs for India and Allan Donald took 4 wickets for 14 runs for South Africa. South Africa took a 1-0 lead in the series with a massive 328-run victory in the first Test.

In the 3rd Test of India’s tour of England in 1952, India produced a batting fiasco on the third day of the match. The Indian team was bundled out twice in a day for a total of 58 and 82 runs. England won the toss and decided to bat first. Indian bowling attack looked ordinary as the hosts piled up a gargantuan score of 347/9d.

On the third day of the match, India got the chance to bat. Sensing the opportunity presented him through a pitch greasy on top after rain, Fred Trueman produced so much pace and extracted such life from the turf that he thoroughly demolished the Indian batting. Much as he was assisted both by a series of splendid close catches and by a surprisingly irresolute batting. Only two Indian batters, Captain Vijay Hazare and Vijay Manjrekar, showed some resilience and reached double figures. Consequently, the Indian team registered their then second-lowest team total of 58 – all out. England gave India the follow-on but the team wrecked up yet again and made merely 82 runs. As a result, India faced a dastardly defeat by an inning and 207 runs.

On the third spot of the top five lowest scores by India in Tests of all time is the tour that a newly independent nation made to Australia. India was on an Australia tour under the captaincy of Lala Amarnath in 1947. Kangaroo captain, the legendary Don Bradman won the toss and decided to bat first. Don Bradman played one of his kind innings and played a brilliant 185 runs knock. Australia, riding on the back of Bradman’s ton declared their innings at 382/8.

With the ball doing all manner of unexpected tricks, Indian batting, used to the fast, hard pitches in their own country, completely baffled. The Indian team couldn’t stay the course and were bowled out for only 58 runs. Lala Amaranth was the highest scorer with a 40-ball resistance and scored 22 runs. However, these runs were never going to be sufficient. The pace trio of Ray Lindwall, Bill Johnston, and Ernie Toshack did the damage and shared 9 wickets among them. Team India was invited for the follow-on but they couldn’t hold on to the wicket and was once again bowled out for 98 runs. Unfortunate to be caught on a treacherous pitch, India crumbled twice. Australia won the match by an innings and 226 runs.

The second Test match of the series was played at Lord’s Cricket Ground, which is called Mecca of Cricket. In this test match, England captain Mike Denness won the toss and elected to bat first. England scored 629 runs in the first innings despite Bishan Singh Bedi taking 6 wickets. Dennis Ammis scored 188, Mike Danes scored 118 and Tony Greig scored 106. In response, the Indian team put up gallant resistance and scored 302 runs. However, no Indian player could score a century. Despite this, England forced India to follow on and from here the result of the match was decided.

When the Indian team came out to follow-on, on the fourth day of the match, it crumbled for 42 runs in just 17 overs in the second innings. The bad condition of the Indian team can be gauged from the fact that after Eknath Solkar, who scored the highest 18 runs, the second-highest score was 5 runs. For England, Geoff Arnold took 4 wickets for 19 runs in 8 overs and Chris Old took 5 wickets for 21 runs in 8 overs. BS Chandrashekhar could not get down to bat for India. This inning is notorious as “Summer of 42” in Indian cricket parlance. The likes of Sunil Gavaskar and the late Ajit Wadekar have long carried the baggage of that English Summer, inarguably one of the worst in the annals of Indian cricket.

On the top of the top five lowest scores by India in Tests of all time is the only 21st-century score of the Indian team to feature in this list. On the third day of the 1st Day-Night Test against Australia in Adelaide, the Indian innings faltered embarrassingly. In its second innings, the Indian team was reduced to just 36 runs. No batsman in the Indian team could reach double digits. This was only the second instance where no player from a team could reach the double figures. Opener Mayank Agarwal top scored with 9 runs.

Josh Hazlewood took the highest 5 wickets for Australia while Pat Cummins also took 4 wickets. Adding to the pitch’s perils, the line and the length of Aussie Pacers were immaculate. As a result, Kohli and his team had the worst outing of the Indian Test history. The Indian batting was completely exposed by the extra bounce that Australia’s pacers found.