The SportsLiteSports at just one click!
HomeCricketICC T20I World Cup 2022: New Zealand comes out on top in...
Cricket 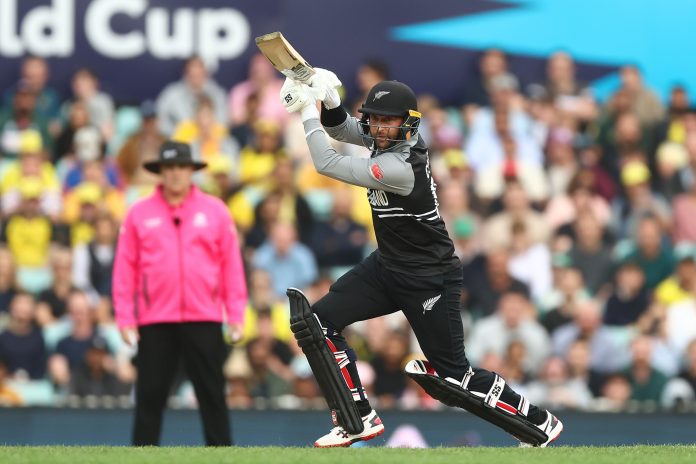 Sydney: New Zealand avenged their 2021 World Cup defeat against the mighty Australians by defeating the latter by 89 runs. The Kiwis steamrolled the Baggy Greens at the first Super 12 match of the ICC T20I World Cup 2022 by rewriting history books even. Additionally, New Zealand won their first-ever T20I match in Australia.

Australia won the toss and elected to field first. Finn Allen and Devon Conway kicked off the batting for the Kiwis. Both led to a monstrous start with Finn Allen getting to 42 off 15 balls. Even though batting slowed down a bit for a few overs after Hazlewood took out Allen, Kiwis came through quickly. It was as if Devon Conway unleashed a mighty beast flinging boundaries right and left. The South-African-born batsman quick-fire 92 runs off 58 balls when the 20 overs settled down. Interestingly enough, The Kiwis did not leave one Australian bowler. Yeah, they killed off everyone with an Economy rate above 9. At the end of 20 overs, New Zealand settled on a target of 201 runs.

The Aussies in chase did not get the start Kiwis got. Finn Allen thrashed Starc in the first over for 14 runs while 2021 hero Warner stumbled and got out in the second over at 5/1. In the powerplay, the Kiwis packed up captain Finch and also one down Marsh. It did not take much longer for the mighty Australians to fall one after the other. Hard-hitters Maxwell, Stoinis, and young talent Tim David failed to live up to the expectations. Soon enough, the Australians crumbled at 111. Tim Southee shined in the match with the figures of 3 for 6. Mitchell Santner (3/31) played a key role in destabilizing the Baggy Greens at every momentum they created.

The Aussie Captain Aaron Finch answered that they were Kiwis were all over them from the beginning. He also added that New Zealand outplayed them in all areas. The frown of defeat marred his face while the winning captain scratched his beard in delight. Kane Williamson beamed in pride as he congratulated his boys for doing well. The Kiwis have taken the victory and a solid start to the ICC T20I World Cup 2022. The Australians have four matches and they will have to ponder hard about their second highest T20I victory.