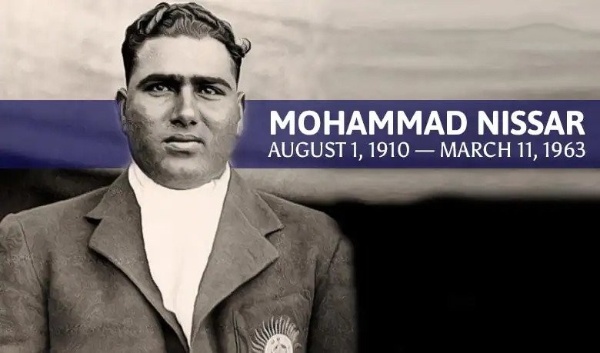 Every Indian cricket fan has grown up listening to the stories of the great Indian spin quartet, Erapalli Prasanna, Srinivas Venkataraghavan, Bhagwat Chandrashekhar, and Bishen Singh Bedi. Of course, they were the greats of Indian cricket. Unfortunately, fans have been so obsessed with these wizards that they forgot India also had an out-and-out fast bowler and his name was Mohammad Nissar.

The debut and tour to England

Mohammad Nissar was born on 1st August 1910 in Punjab. He was India’s very first-pace bowler. His genuine pace had an ability to intimidate the batters and he did exactly that throughout his career.

Nissar was part of the squad in India’s tour to England in 1932. He made his Test debut at  Lord’s on 25th June 1932. He took absolutely no time to show his skill when he sent Herbert Sutcliffe and Percy Holmes towards the pavilion. All the excitement about those wickets was because these two batters had shared a 555 run partnership for Yorkshire just 10 days before.

The tours in those days involved many side games and in the overall tour, Nissar picked 71 wickets at 18.09. Nissar neither had the luxury of previous tours to England nor the facility of video analysis and stuff. That was his real greatness.

Amar Singh, India’s other fast bowler before the independence had a great partnership with Mohammad Nissar, both of them used to scare the life out of the batters.

This generation might have heard Arun Lal as a commentator and broadcaster, but the older generation knows him as a batsman with enormous talent, terrific First-Class record who ended up underachieving in the International circuit.

Arun Lal, the right-hand opener batsman was born today in 1955 in Moradabad.

The talent which had deserved the better career

In 1982, Chennai was the place where he first donned the Indian colors in Tests and scored a gritty 63 runs. The 156 run partnership with the Great Sunil Gavaskar completed his dream of sharing the pitch with the legend.

This promising young batsman, unfortunately, couldn’t flourish at International cricket. The Test average of 26 and of ODI 9, doesn’t really justify the talent he had possessed.

The one-day format was perhaps not his cup of tea. He was a resilient batter but probably lacked the ability to score quickly.

The inspiration to many

The jaw cancer terminated his career in the commentary box in 2016.

This gritty and resilient batsman fought cancer in the same way. His tenacity has been rewarded as he has completely recovered from the rare disease.