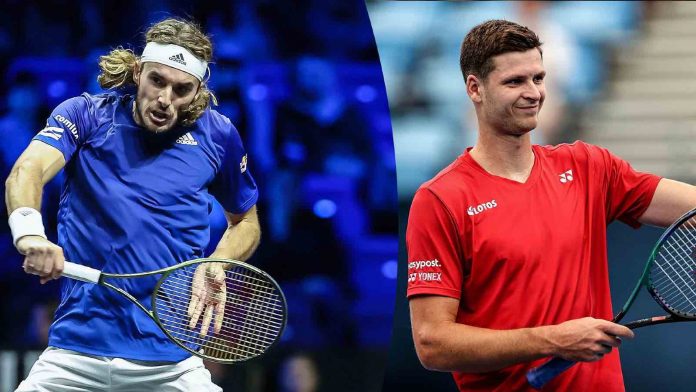 On Friday, Stefanos Tsitsipas and Hubert Hurkacz will square off in the 2022 Astana Open quarterfinals.

Tsitsipas advanced to the second round, where qualifier Luca Nardi awaited him, after defeating local favourite Mikhail Kukushkin in straight sets. In the first set, neither player came near to a break point since they both successfully guarded their serves. The Greek won the set after an outstanding tie-break performance. The second set proceeded in a nearly identical fashion, with the exception that Nardi had a few break points to go ahead 6-5 and would’ve served for the match at that time. However, Tsitsipas managed to save himself and maintain serve. Soon after, the set entered its third tie-break, with the World No. 5 winning it to take the set 7-6 (2), 7-6. (3).

In order to face Alexander Bublik in the next round, Hubert Hurkacz needed to defeat Francisco Cerundolo in straight sets. To go up 4-1 in the first set, he twice broke his rival’s serve. In the following game, the World No. 10 had a few set points on his opponent’s serve but was unable to win it. In the following game, he was still able to serve out the set by himself. In the second set, Hurkacz secured an early break to take a 3-1 advantage. Bublik was unable to hinder the Pole’s serve this time, unlike in the previous set. The 25-year-old won the contest 6-4, 6-4 by maintaining the advantage he had gained.

Prior to this, the two had eight previous encounters. Hurkacz is 6-2 behind Tsitsipas in the head-to-head matchup. At the Miami Open in 2021, the Pole triumphed in their prior encounter in three sets.

This week in Astana, both athletes shown impressive consistency. This year, Tsitsipas has been more consistent than Hurkacz, and considering their prior encounters, the 24-year-old may continue to outperform his rival.