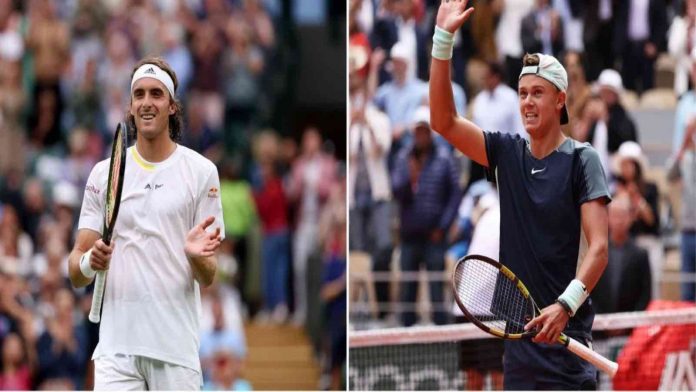 On Sunday at the 2022 Stockholm Open, Stefanos Tsitsipas and Holger Rune will compete for the championship.

Tsitsipas advanced to the last four after a first-round bye and victories against Maxime Cressy and Mikael Ymer. In the semifinal match, he faced Emil Ruusuvuori, who had eliminated Frances Tiafoe in the first round. In the first set, he was the first to go up a break, leading 2-1, but Ruusuvuori soon returned to serve to tie the match. The Greek then won four straight games to take the set after twice breaking his opponent’s serve. In the second set, Tsitsipas made little effort at all as he quickly took the lead at 3-1. Ruusuvuori kept his serve, but the top seed won the next three games to take the match 6-2, 6-2.

To advance to the last eight, Rune defeated Cristian Garin and Thiago Monteiro in straight sets. Then, he defeated Cameron Norrie in his maiden victory to advance to the semifinals, where he faced Alex de Minaur. At 5-4 in the first set, the teenager was serving to stay in it when the Australian broke his serve to win it. Four serves were broken in the opening five games of the second set, which ended in a tiebreak. To win and seal the set, Rune displayed outstanding tennis. At 6-5, the Australian served to keep the match alive, but Rune broke his opponent’s serve to win 4-6, 7-6 (1), 7-5.

In their previous meeting, Rune defeated Tsitsipas 1-0. At the 2022 French Open, he defeated them in four sets to win.

Tsitsipas will have a little advantage going into this matchup based on how they have performed thus far this week. Rune will probably put up a fight, but the Greek should be able to hold his own and take home his third championship of the year.