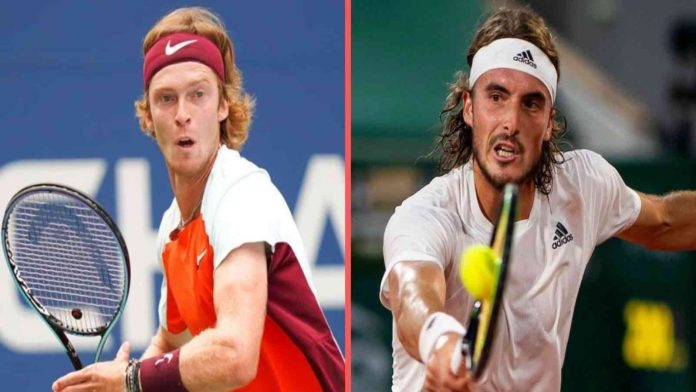 In the Astana Open semifinal match, world no. 6 Stefanos Tsitsipas will take on world no. 9 Andrey Rublev.

In the Astana quarterfinals, Tsitsipas triumphed over Hubert Hurkacz after a tough battle. The Greek had five set points in the first set against him, but he was able to maintain his composure and win the set 7-6. (8). Although he prevented himself from dropping a set in the capital of Kazakhstan, he had to struggle and only managed to break the Pole once in the last stages of the match after he had been denied eight previous breakpoints. The 2021 French Open finalist won the match 7-6 (8), 6-3, and moved on to his ninth season quarterfinal.

Meanwhile, Andrey Rublev has a 2022 record of 43 wins and 15 defeats. Three titles have been won by the Russian, at Marseille, Dubai, and Belgrade. At the Citi Open, the Swedish Open, the Indian Wells Masters, and the Rotterdam Open, he advanced to four additional semifinals. His three prior matches at the Astana Open went without a hitch. Rublev defeated Zhizhen Zhang 6-3, 6-3 in the second round after defeating Laslo Djere 6-4, 6-3 in the first round. He defeated Adrian Mannarino in the quarterfinals with a commanding 6-1, 6-2 victory to go to his eighth semifinal of 2022.

Tsitsipas and Rublev have previously faced each other nine times on the ATP tour. The Greek has a 5-4 advantage in their head-to-head record. The most recent meeting between the two players took place in the 2022 Madrid Open quarterfinals, when Tsitsipas prevailed 6-3, 2-6, 6-4.

Although there are no apparent favourites in the match, Rublev’s more reliable performance at the Astana Open will probably allow him to tie the Greek competitor in head-to-head matches.