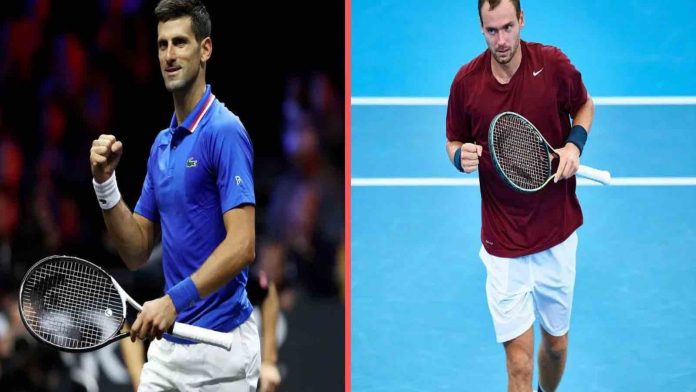 The second round was bye for the Serb, who then faced Pablo Andujar. He was destroyed by Djokovic, who was in excellent form, 6-0, 6-3, setting up a quarterfinal matchup with Vasek Pospisil of Canada. Both teams’ opening set was hotly contested and ended in a tiebreak. Djokovic seized the lead with a score of 5-1, but Pospisil fought back to tie the game at 5-5. The Serb, though, took the following two games to claim the opening set.
In the second set, Djokovic broke early, but Pospisil broke him back. However, the Serb defeated the Canadian and earned a spot in the Tel Aviv Open semifinals after breaking him in the penultimate game of the set.

Safiullin, on the other side, defeated Hugo Grenier in the Tel Aviv Open first round with scores of 3-6, 6-4, and 6-2. He then won 6-1, 6-4 over Tomas Marco Etcheverry to go to the quarterfinals and play Arthur Rinderknech. The Russian defeated the Frenchman once more in straight sets to go to his second semifinal of the year after previously reaching the Open 13 in Marseille’s last four.

This is their first encounter so the head-to-head is at 0-0.

Safiullin’s serve is quite effective and may get him some free points, but he must be careful not to serve too frequently double-faults, especially when facing Djokovic’s brilliance on the return. If the Russian is to have a chance against the Serb, he must maximise his service games and cannot afford to commit too many errors.
Although Djokovic is still working on his rhythm, he shouldn’t have any problem defeating Safiullin and winning the Tel Aviv Open.