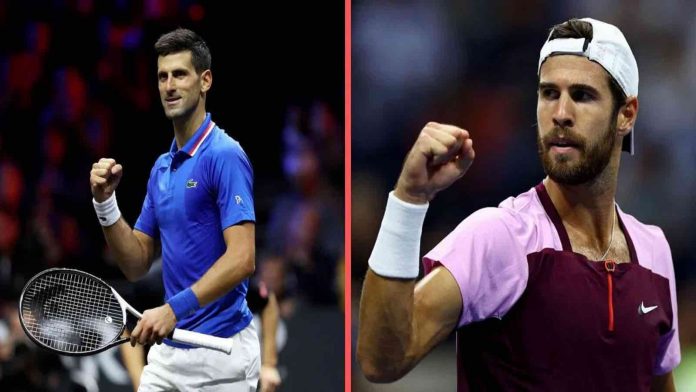 On Friday, the fourth seed Novak Djokovic will play Karen Khachanov in the Astana Open quarterfinals.

Djokovic defeated Marin Cilic in the Tel Aviv Open final last week to earn his third championship of the year and became the first player to win championships on all three surfaces. In the opening round of the Astana Open, the Serb faced Cristian Garin. He destroyed the Chilean 6-1, 6-1 to earn a matchup with Botic van de Zandschulp in the Round of 16. In the sixth game of the first set, Djokovic made the crucial break that allowed him to win it 6-3. He completely dominated the second set and won it 6-1 to advance to the quarterfinals.

After making his first Grand Slam semifinal at the US Open, Karen Khachanov competed in his debut competition in the Astana Open. Maxime Cressy was defeated by the Russian 6-4, 7-6 to begin the ATP 500 competition (3). In the second round, he faced Marin Cilic and dropped the first set 6-2. In the second set, Khachanov recovered and broke Cilic again to win it 6-3 and force a decider. In the fourth set, the 26-year-old built a 3-1 lead and saved a break point in each of his last two service games. Khachanov eventually prevailed in the set 6-3 to guarantee his place in the Astana Open semifinals.

Djokovic is patient when constructing his points and enjoys playing from the baseline. He will benefit from his superior defensive abilities and return game when playing the powerful Khachanov. The former World No. 1 will easily defeat the Russian if the Russian is not at his best during his service games. Djokovic appears to be in excellent shape and will very certainly easily earn a spot in the semifinals.