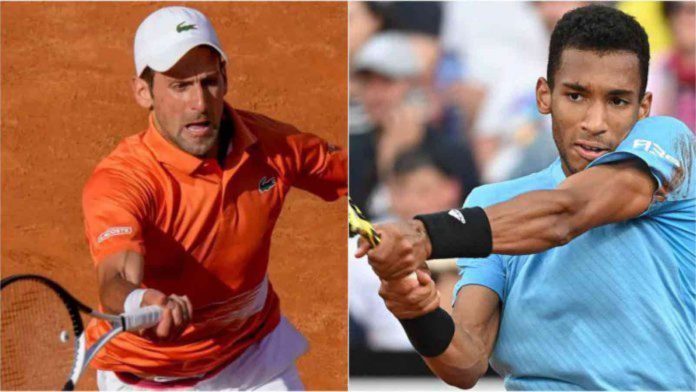 The second match of the third day of the 2022 Laver Cup will see world number seven Novak Djokovic taking on Canadian Felix Auger-Aliassime, who is ranked thirteenth.

Even though Djokovic started off as a huge favourite, we thought there was a good chance he might have been a little rusty in his opening match against Frances Tiafoe. Djokovic hadn’t played tennis against opponents in two months, to start. Second, the opponent he faced had recently displayed strong form, which was evident in his confidence. Djokovic was not having it as he easily defeated Tiafoe 6-1, 6-3 to give Team Europe a point. Additionally, Djokovic drove home the same message in the final match of the day, when he and Matteo Berrettini defeated Jack Sock and Alex de Minaur once more in straight sets.

For this match, Felix will compete against the 21-time Grand Slam champion. Nothing could be more difficult. Because of this, Auger-fitness Aliassime’s could be put to the test, making the task even more difficult than it already is if he were to compete against one of the fittest tennis players. On the first day, Auger-Aliassime had also competed in a singles match against Matteo Berrettini. In a battle that lasted two hours and seventeen minutes, Auger-Aliassime lost the opening set to his Italian opponent after wasting a set point in the tiebreaker and saving five others. He reversed the damage by winning the second before the match tie-breaker went Berrettini’s way.

There will be no question as to who starts out as a huge favourite in this match with the Serb in the kind of form he has been in. He ought to be able to keep that beat. Despite a valiant effort by Auger-Aliassime, the odds are heavily in favour of Djokovic, who should win this match in straight sets once more.

Akshat Joshihttps://thesportslite.com/
Akshat has played professional Tennis under the All India Tennis Association and is a certified sports fanatic. He is also a law student devoted to fitness and movies, Tennis takes centre stage in Akshat's life. "Life is a sport, make it count" are the words he lives by.
RELATED ARTICLES
Forever Facts