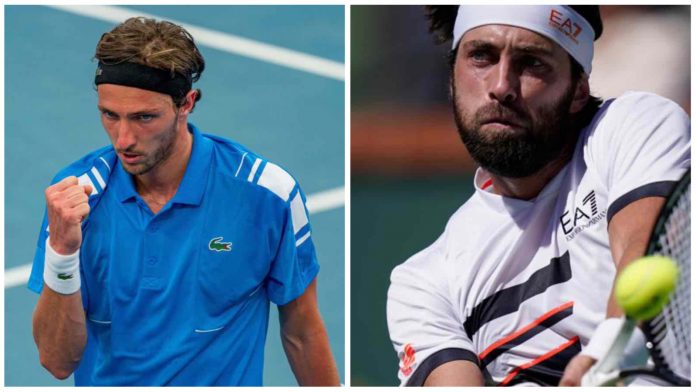 Nikoloz Basilashvili, the top-ranked player in Georgia and the 36th-ranked player in the world, will play Arthur Rinderknech, who is rated 60th, in the 2022 Moselle Open’s second round on Thursday, September 22.

Basilashvili appeared to be destined for a seventh straight loss versus Zizou Bergs after entering this competition riding a six-match losing run. Against Bergs, Basilashvili was down a set when his opponent was forced to give up the match.
This victory gives Basilashvili some breathing room as he attempts to regain the form that let him reach the Doha final earlier this year. However, Basilashvili may find it difficult given that his opponent has had some success in hard court matches during his career.

Rinderknech, who started off as a favourite against Jaume Munar, eventually advanced to the second round, but not before being forced to the limit. Despite falling 4-1 behind in the third set, Rinderknech won 6-2, 2-6, 7-5 in two hours and six minutes. In the end, Rinderknech regained control of the match after breaking serve in the third set’s seventh game and serving it out to love in the set’s eleventh game. He now faces a guy who is in poor form and who is arguably fortunate to have made it there. Expect Rinderknech to make a solid first statement.

These players have faced off twice before, with Basilashvili winning both matches in straight sets. In 2022, they played their most recent game in Doha.

While Basilashvili has always been a heavy hitter of the ball, he has been in terrible form as of late. Rinderknech on the other hand, brings more to the table in terms of skills, and is in good form, enjoying a good run. Expect him to come through despite some heavy hitting threat from Basilashvili.

Prediction: Rinderknech to win in 3