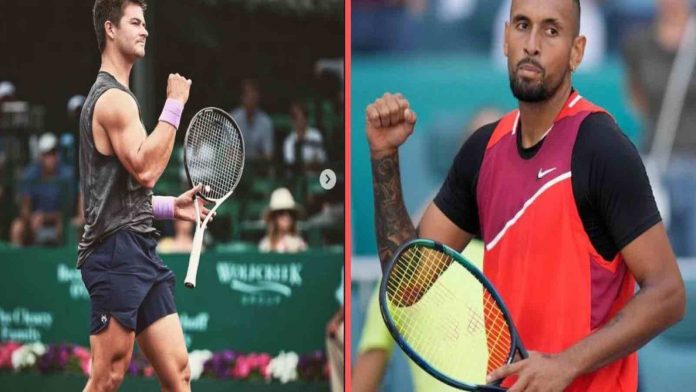 23rd seed Nick Kyrgios will square off against home-hope J.J. Wolf in the third round of the US Open on Friday.

Thanasi Kokkinakis, Kyrgios’ closest buddy, was drawn to face him in the opening round. Both athletes took advantage of the festive atmosphere at Arthur Ashe Stadium, but the 2022 Wimbledon champion won easily, 6-3, 6-4, 7-6. (4). In the second round of the competition, the Australian played Benjamin Bonzi and defeated the Frenchman with 30 aces. The 23rd seed easily won the first two sets, but in the third set, Bonzi came back and broke the Australian’s serve. Until 5-4 in the fourth set, when Kyrgios upped his game and broke Bonzi’s serve to win the match, both players maintained their serves.

The considerably more seasoned and 16th seeded Roberto Bautista Agut, however, was shown the door by J.J. Wolf, who defeated him 6-4 6-4 6-4. He defeated Alejandro Tabilo in four sets by maintaining a 76% success rate on his first serve in his second-round encounter. J.J. was a wildcard entry. With no career victories, Wolf is presently rated 87th in the world. J.J. American player Wolf is a rising star who enjoys playing huge shots and has a strong serve. He is known to suffer mentally, though, and to falter at key times in games.

Kyrgios and Wolf have not played each other on the ATP tour to date, so their head-to-head record stands at 0-0.

On the floor, the two teenagers have similar personalities, so Friday’s third-round matchup can get heated. While Wolf will bet on a surprise, Kyrgios is starting to resemble the Wimbledon champion and should be able to secure his place in the round of 16.