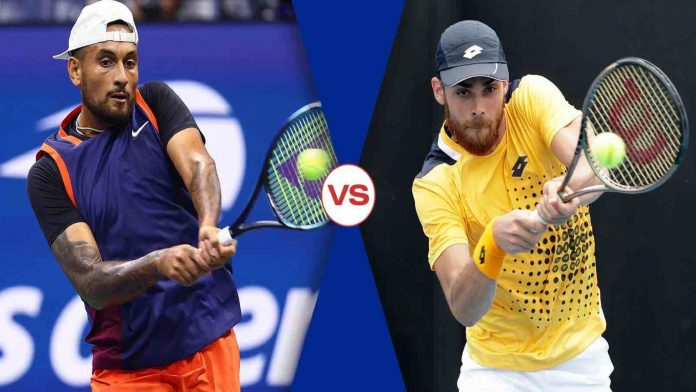 World No. 25 Nick Kyrgios will take on Frenchman Benjamin Bonzi in the second round of the 2022 US Open on Wednesday.

Thanasi Kokkinakis, Kyrgios’ best friend, was drawn to face him in the opening round. For the most of the first set, both players held serve comfortably. The set was broken in the set’s eighth game by the 2022 Wimbledon finalist, who then easily served out the set to win it. He then successfully broke serve to take a 2-0 lead in the second set. He won the set by maintaining this advantage till the very end. In the third set, Kokkinakis had three break points but was unable to take advantage of them. The set ultimately required a tie-break. The 27-year-old won the match 6-3, 6-4, 7-6 after dominating the tie-break (4).

Ugo Humbert, a fellow countryman, was Bonzi’s opponent in the opening round. A tie-break was required to decide the set, which Bonzi won. The second set was incredibly one-sided, with Bonzi winning it by twice breaking his opponent’s serve. He improved and won it with a break of service in the third set’s deciding game. In the fourth set, Humbert jumped out to a quick 4-1 lead. The 24-year-old then completed the set to force a decider. First to act in the final set was Bonzi, who went up a break and led 3-0. The 26-year-old defeated his opponent 7-6 (1), 6-1, 5-7, 3-6, 6-2 by breaking his service one last time.

Until now, Bonzi had never advanced past the second round of a Grand Slam. He will have to play the game of his life to accomplish this against a player of Kyrgios’ calibre. It’s unlikely that the Australian would be eliminated from the competition this early, though, as he has become into a different player this year.