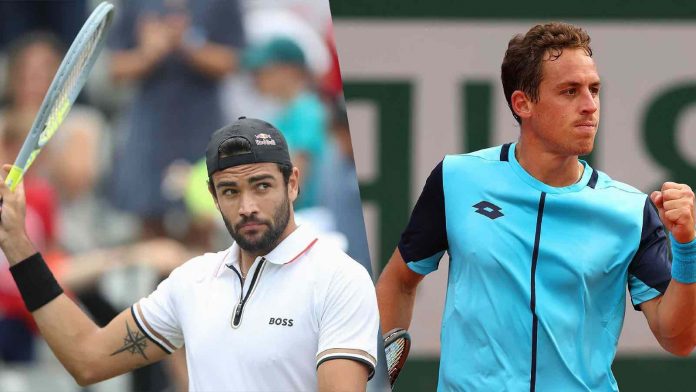 Home favourite Matteo Berrettini will play World No. 80 Roberto Carballes Baena on Wednesday in the second round of the 2022 Firenze Open after receiving a bye in the first round.

Berrettini missed three months of action after a good start to the season that featured a semifinal finish at the Australian Open. The Italian triumphantly returned, taking home back-to-back championships at Halle and Queen’s Club. Unfortunately, his COVID-19 test result caused him to withdraw from Wimbledon. He finished second at the Swiss Open after rejoining the tour. In Cincinnati and Canada, Berrettini failed to win a single match. Despite losing against Casper Ruud, he still advanced to the US Open quarterfinals. The following year, he participated in the Davis Cup and won all three of his singles matches. His most recent competition was the Laver Cup, where he defeated Felix Auger-Aliassime to win his lone singles match.

At the Firenze Open, Roberto Carballes Baena faced up against Daniel Elahi Galan in the opening round. The Spaniard got the match underway in style, sprinting to a 4-0 lead in the first set. Later, he finished the set with ease. The imbalance increased in the second set. Galan held service to start things off, and then Carballes Baena won the match 6-2, 6-1 after winning six games in a row. Additionally, the two will face Miguel Angel Reyes-Varela and Nicolas Barrientos in a doubles matchup.

In their matchup, Berrettini has a 1-0 advantage over Carballes Baena. At the 2019 St. Petersburg Open, he defeated her in straight sets.

Carballes Baena is mostly an expert on clay courts. His triumph over Galan in the first round was just his second on hardcourts this year; the other seven victories all came on the red dirt. On the other hand, Berrettini is at ease on every surface. Their serves are very different, with the Italian having a significant advantage over his rival. This year, he has won 88.5% of his service games, placing him sixth on the ATP tour. Although Carballes Baena is used to slogging it out in games, the environment in Firenze doesn’t favour that kind of play. He did fairly well against Galan in the opening round, but he won’t get close to Berrettini.