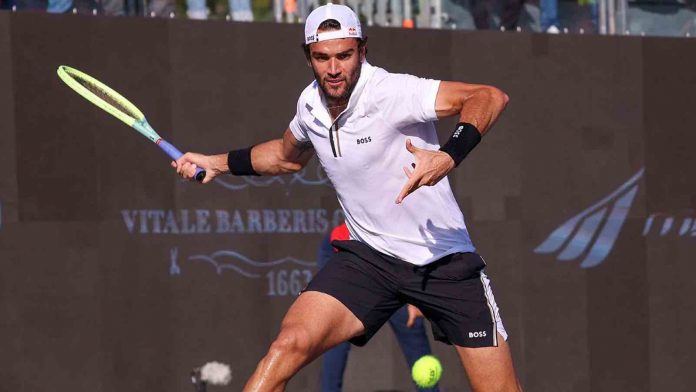 On Saturday, October 22, Italy’s Matteo Berrettini, the second seed, and America’s Mackenzie McDonald will square off in the semifinal of the 2022 Tennis Napoli Cup.

Mateo Berrettini, the second seed and the fan favourite at home, easily defeated Taro Daniel in the quarterfinal on Friday. Italian Berrettini won 6-2, 6-3 with the help of seven aces and 36 winners in what turned out to be a strong effort. The world number 16 won in just one hour and 24 minutes, facing no break points while breaking the Japanese twice in both sets. As he easily defeated Carballes Baena 6-4, 6-2 in the second round, Berrettini, who earned a bye in the first round, continued his unbroken streak. In the Italian’s first-round encounter against the Spaniard in Florence last week, Berrettini was stunned. However, the Italian got his comeuppance this week and appears to be in perilous shape.

In the quarterfinals on Friday, world no. 74 Mackenzie McDonald rallied after falling behind a set to halt Chinese qualifier Zhizhen Zhang’s impressive tournament run. The American is just one victory from competing in his second final of the career. McDonald served 10 aces, saved 7 of 8 break opportunities, and won the match in 1 hour, 55 minutes with scores of 4-6, 6-3, 6-2. In the first round of the Naples tournament, he defeated Francesco Passaro 6-3, 7-5. In the second round, he defeated third-seeded Roberto Bautista Agut 6-4, 6-4.

In 2019, Berretini triumphed in their lone encounter in straight sets.

This season, Berrettini has been significantly more reliable than McDonald. He is a household favourite and appears to be in fantastic shape. He should easily get to the final.