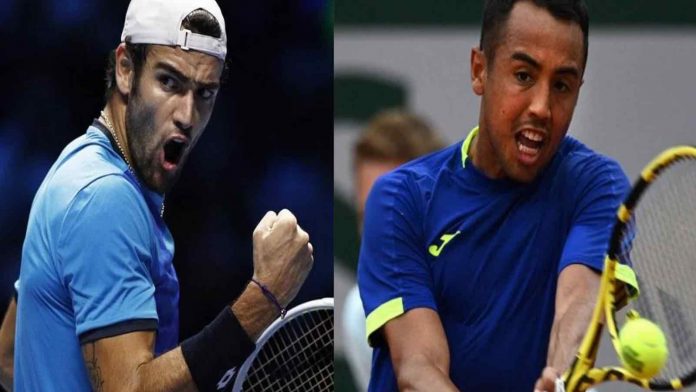 Wimbledon 2021 finalist and 13th seed Matteo Berrettini will take on Hugo Dellien in the first-round of the US Open on Tuesday.

This season, the Italian has prevailed in 21 of the season’s 31 games. With a semifinal berth at the Australian Open, the Italian has made a fantastic start to his 2022 campaign. The Rio Open, Mexican Open, and Indian Wells Masters all saw the World No. 15 lose early. The Italian won his first title of the year at the Stuttgart Open by defeating three-time Grand Slam champion Andy Murray. In order to win the Queen’s Club Championship, Berrettini only lost one set. Berrettini made it to the Swiss Open final after missing Wimbledon. Since then, Berrettini’s form has subsequently declined.

Hugo Dellien began his season by competing in back-to-back semifinals in Chile and Bolivia. The 29-year-old left the Chile Open rather quickly. On the Santiago Challenger tour, Dellien resumed his winning ways. In the championship match, the World No. 73 defeated Alejandro Tabilo with scores of 6-3, 4-6, and 6-4. In the final of the subsequent Concepcion competition, Tomas Martin Etcheverry halted Dellien’s amazing streak. The last time the Bolivian competed on tour, he lost to Alex de Minaur in the opening round at Wimbledon. In 16 matches on the ATP tour this year, he has only five victories.

The pair have not faced each other yet, so their head-to-head stands at 0-0.

Dellien, who is the underdog in the contest, will have to take advantage of Berrettini’s flaws in order to challenge him. The Italian’s performance on hardcourts (54.5 win%) is likewise subpar. Hugo Dellien has yet to triumph on the surface this year, but Matteo Berrettini is extremely likely to defeat him despite his lack of success in the summer hardcourt swing.