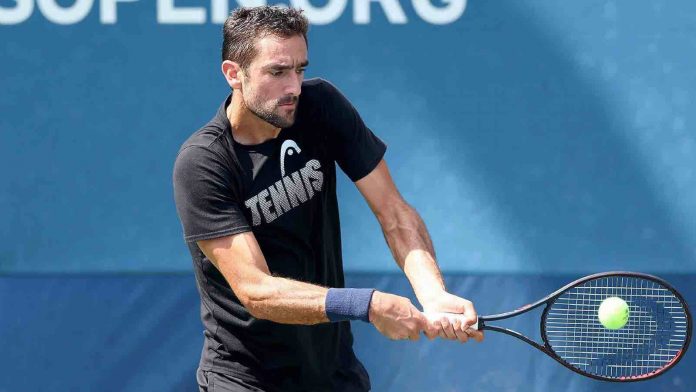 Marin Cilic has steadily moved up the rankings, and he is currently at No. 13—the highest position of the season. The 34-year-old Croatian is 31-18 thus far this year, and that includes making his first-ever French Open semifinal appearance. Cilic has lost four semi-final matches this year. He did, however, manage to advance through the final four in Tel Aviv earlier this month, but was unable to capture a 21st championship after losing in straight sets to Novak Djokovic. The former No. 3 had advanced to a tour level final 36 times in total. Cilic is 3-2 inside and 19-12 on hard courts so far this year.

Arthur Rinderknech, the world’s number 51 player, defeated fellow Frenchman Constant Lestienne in a comeback victory to advance to the main draw after defeating Jason Kubler in a three-set first qualifying round on Saturday. The world number 51 fell in the opening set, recovered in the second with just one break, and then broke Lestienne twice in the last set while only being broken once to win the match 3-6, 6-3, 6-4 and go to Basel’s main competition. Rnderknech is a good hard court player who has recently been on fire. He has a 9-3 record across all levels on indoor courts, and in his most recent three competitions, he reached the quarterfinals in Metz and Tel Aviv and the semifinals in Gijon.

At the Roland Garros last year, Cilic prevailed in their lone prior encounter.

Due to their consistency, both are in good shape and have risen significantly in the rankings. Expect a close match, with Cilic—who has more experience—advancing to the next round.