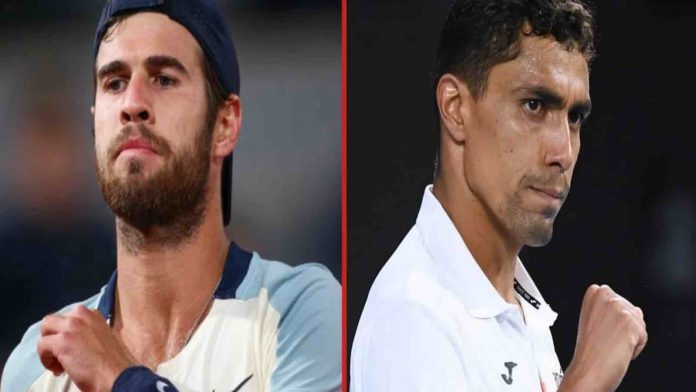 Karen Khachanov and Thiago Moneiro on Monday came through similarly tight opening-round wins at the 2022 US Open to set up a second-round showdown.

First up on Court 13, Denis Kudla, a fan favourite at home, was defeated by Khachanov after a sluggish start. The Russian, who had also defeated Kudla in the Australian Open first round, recorded his 27th victory of the year against 20 losses to go to the next round. Khachanov will now try to advance to the third round and replicate his best result from the US Open.

In contrast, Monteiro defeated Alex Molcan in a wild four-set match, ultimately winning 6-4, 4-6, 6-4, 6-1. For the Brazilian, who had failed to win in any of his previous three US Open outings, the triumph was significant. However, a strong showing on the serve allowed him to defeat a tough foe and secure the victory. It will be crucial for Monteiro to carry the advantages from the competition into uncharted territory.

Monteiro has the ability to vary his shot selection, which might cause Khachaov problems. During rallies, the Russian will need to practise patience and refrain from asking for too much too soon. Khachanov should be able to defeat the Brazilian in the rapid New York conditions and go to the third round of the US Open for the third time in his career if he can control his error count.

Prediction: Khachanov to win in 4 sets