The World Number 8 Matteo Berrettini uses his height to his advantage, as he serves at lighting speed. 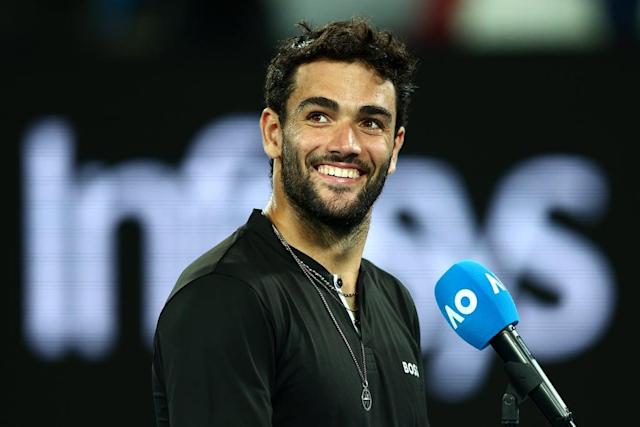 Tennis is an important part of the Berrettini household. His brother Jacopo Berrettini even is also a pro tennis player. Jacopo is currently ranked 442 by the ATP. Jacopo made his ATP main draw debut at the 2021 Sardegna Open in the doubles draw, partnering with his older brother Matteo.

(2) Roger Federer is his tennis idol

Berrettini looked up to Roger Federer as long as he could remember. He first faced 20-time Grand Slam came at Wimbledon in the fourth round back in 2019. Berrettini lost the match to Federe in a three set match.

The 1.96m-tall (6ft 5in) tennis giant has a lightning speed serve, which has become an increasingly key factor of his game. He has recorded a speed of 235kph (146mph). This speed which understandably takes something special to get back from the other side of the net.

(4) Tennis isn’t only his passion

Berretinni’s was glued to the Euros and Italy’s route to Euro 2020. But aside from the major championships, he’s a keen fan of Serie A side Fiorentina and is also a big NBA fan.

Berretinni’s has won 3 ATP titles so far since he turned pro in 2015. He has won two tournament on clay that is Swiss Open and Hungarian Open. He even won one on grass Stuttgart Open.

This young upcoming player has a long way to go and will be threat to the top players due to his serve speed which is 235 kph.