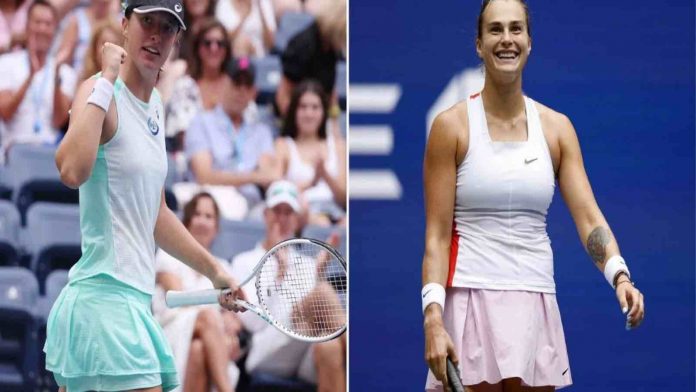 2022 French Open champion Iga Swiatek will take on World No. 6 Aryna Sabalenka in the semifinals of the 2022 US Open on Thursday.

Swiatek defeated Jule Niemeier in the fourth round in three sets after defeating Jasmine Paolini, Sloane Stephens, and Lauren Davis in straight sets earlier. The quarterfinal matchup between the World No. 1 and Jessica Pegula followed. In the first set, the American was the first to lead by a break, 3-2. Swiatek, though, won the following four games in a row to win the set. Four consecutive service breaks opened the second set. Six straight service breaks finally resulted in a tie-break. Once more, they had trouble maintaining their serves, but Swiatek improved to take the game 6-3 7-6. (4).

Sabalenka defeated Catherine Harrison with ease to begin her campaign. Following her victory over Kaia Kanepi in the second round, she defeated Clara Burel and Danielle Collins to go to the quarterfinals, where she will face 2016 US Open champion Karolina Pliskova. She quickly went out to a 4-0 lead in the first set. Pliskova was wholly uninterested despite the fact that she was focused right away. The Belarusian quickly and easily took the first set. Ultimately, Sabalenka prevailed to win 6-1, 7-6 (4) and go to her second consecutive semifinal in New York.

They have faced off four times before this, with Swiatek leading 3-1 in the head-to-head. She won their previous encounter at the 2022 Italian Open in straight sets.

While Sabalenka is attempting to make it to her first Grand Slam final, Swiatek has previously won two Major championships. She struggled with nerves in last year’s semifinal match against Leylah Fernandez, and they could do so again. In the end, it’s difficult to imagine Swiatek losing this one given her performance this year.