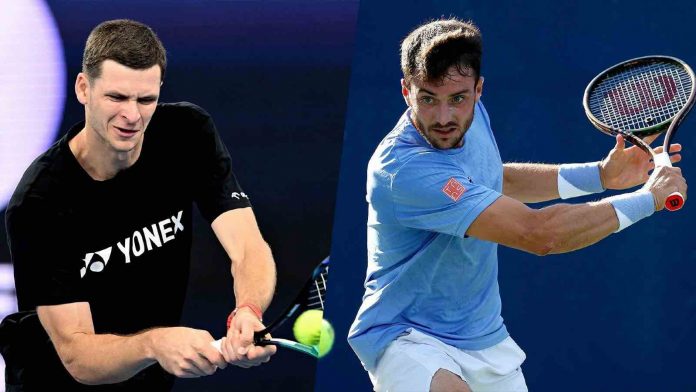 On January 16, Hubert Hurkacz, the tenth seed, will compete against Pedro Martinez in the Australian Open’s opening round.

Hurkacz began his 2023 campaign in the United Cup while playing for Poland. The 25-year-old advanced the Poles to the tournament’s knockout rounds by winning both of his singles matches during the group round. Hurkacz lost to Matteo Berrettini, but he and Iga Swiatek won the crucial mixed doubles match to advance Poland to the semifinals. Hurkacz lost against Taylor Fritz 7-6(5), 7-6(5) as the eventual victors, the United States, beat them 5-0.

Martinez, on the other hand, began his 2023 campaign in the Tata Open in Pune, where he defeated Ramkumar Ramanathan in the first round with a score of 3-6, 7-5, 6-3. He subsequently had a similar triumph over fourth seed Sebastian Baez, winning 3-6, 6-1, 6-3 to get to the quarterfinals. The eighth-seeded Aslan Karatsev defeated the Argentine 6-1, 6-2 in their round. The 25-year-old was slated to compete in the Auckland ASB Classic against Marcos Giron in the opening round. He opted out of the ATP 250 competition, though.

Hurkacz defeated Martinez in the second round of the Monte-Carlo Masters last year, winning 6-3, 4-6, 6-4 to take a 1-0 edge in their head-to-head matchup.

The Pole, one of the top servers in the game, will attempt to get as many unearned points by aces as is humanly feasible. He has good counterpunching skills and has strong punches. Additionally, he has the ability to put pressure on his opponents and coax mistakes out of them. Martinez plays with extreme caution and may take a lot of rallies. The Spaniard often tries to force mistakes out of his opponents, but doing so against Hurkacz will be exceedingly challenging. To enrage the Pole, he will need to be much more. Hurkacz appears to be in good shape right now and should have no issue advancing to the next round.

Prediction: Hurkacz to win in 4