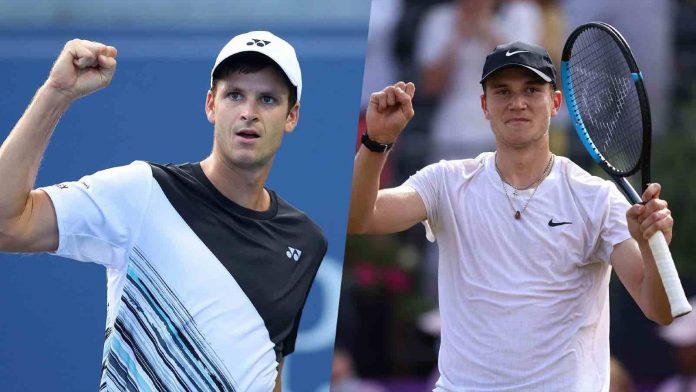 On Wednesday, Hubert Hurkacz, the top seed, will play Jack Draper in the second round of the European Open.

This season, the Pole has displayed some strong performances; he won the Halle title by defeating Daniil Medvedev in the championship match. He advanced to the Miami Masters semifinals and the Canadian Open final, respectively. Hurkacz exited the US Open in the second round, which was upsetting. He recovered to advance to the Moselle Open semifinals at Metz, where he was defeated by eventual winner Lorenzo Sonego. The following year, he competed at the Astana Open as the seventh seed and advanced to the quarterfinals before falling to Stefanos Tsitsipas 7-6(8), 6-3.

While all was going on, Jack Draper’s most noteworthy accomplishment this year was making it to the quarterfinals of the Canadian Open before losing to eventual champion Pablo Carreno Busta. After defeating Dominic Thiem and Fabio Fognini, he advanced to the Winston-Salem Open’s round of eight. But Marc-Andrea Huesler defeated him 6-4, 6-4, ending his winning streak. Draper then defeated Felix Auger-Aliassime and Emil Ruusuvuori to get to the third round of the US Open. Due to a hamstring injury, he was forced to leave his third-round match against Karen Khachanov in the third set. The British contestant is currently in Antwerp for the European Open. He defeated Jenson Brooksby 6-1, 6-2 to earn a spot in the next round.

As one of the finest servers in the game, the Pole will try to get as many unearned points as possible off that shot. He can rapidly transition from defence to offence and plays an effective baseline game. In his first-round match against Brooksby, Draper thoroughly dominated, winning 32 of the 37 points on his serve and nailing 21 winners. The Brit might pose challenges for Hurkacz because he is a strong hitter off both wings. The game seems intriguing, but the Pole has a little more experience and has a chance to win if he plays well.