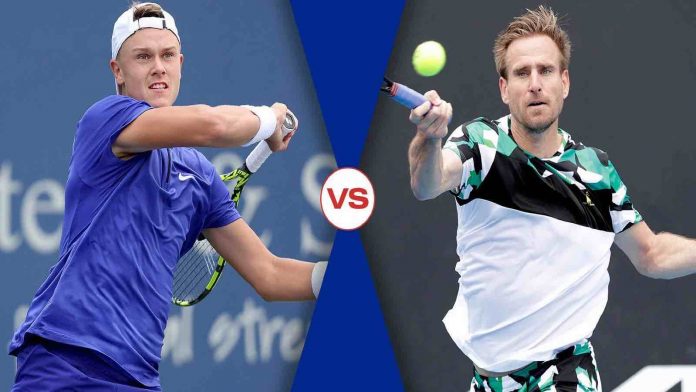 Teen star Holger Rune will face off against Germany’s Peter Gojowczyk in the first round of the 2022 US Open on Tuesday.

In recent weeks, Rune has been going through a difficult time. During the European clay season, the adolescent found his footing. Rune won his first ATP championship at the BMW Open in Munich. He advanced to the Lyon Open semifinals the following week. The Dane later made his maiden Grand Slam quarterfinal appearance at the French Open. Next, Rune dropped out of his first six competitions, including Wimbledon. At the Citi Open, he ended his losing streak by defeating Benoit Paire, but in the next round, he was defeated by J.J. Wolf. Although Rune lost in the first round in Cincinnati, he also advanced to the second round at the Canadian Open.

Gojowczyk has had difficulty this season; he has only won three main draw matches. In the first five events of the year, including the Australian Open, he lost in the first round. The 33-year-old defeated Jiri Lehecka in the Winston-Salem Open to earn his third victory of the year after suffering two more first-round losses. However, he was defeated by Ilya Ivashka in the following round. Gojowczyk’s latest Grand Slam performance came when he advanced to the fourth round of the US Open.

The two have not squared off prior to this, so the head-to-head stands at 0-0.

Both players might sense the pressure of competing at a Grand Slam because they have recently had more defeats than wins. Additionally, it’s a fantastic chance for them to score a crucial victory. Rune has generally played better than his opponent, thus he ought to be able to win.