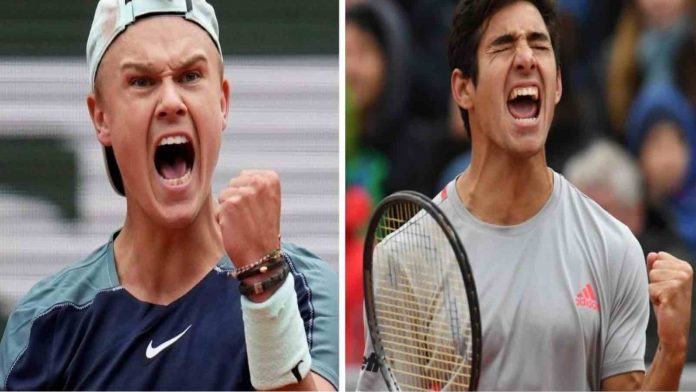 On Wednesday, the second round of the Stockholm Open will feature a match between World No. 89 Cristian Garin and World No. 27 Holger Rune.

Holger Rune won easily over Brazilian Thiago Monteiro 7-5, 6-2 in the opening round of the tournament in Stockholm, moving on to the round of 16. The Dane came into the competition after placing second in the Sofia Open. Rune has a win-loss record of 25-23 this season, which is inconsistent. The adolescent won the Bavarian International, his first ATP Tour victory. In August, Rune attained a career-high ranking of No. 26 in the world. The young Dane participated in the Lyon Open semifinals before making his debut in a Grand Slam quarterfinal at the French Open. Rune’s performance subsequently began to deteriorate as he amassed a seven-match losing skid before barely rebounding during the summer hardcourt season.

Meanwhile, Cristian Garin has a losing record of 18-21. Although he suffered numerous first-round defeats, he did manage to go to the semifinals of the ATP 250 in Houston as well as the quarterfinals of the Italian Open and Wimbledon. The Chilean’s ranking slipped from No. 17 at the start of the 2022 season to his current position of World No. 89, in part because Wimbledon, where he advanced to the quarterfinals, did not grant ranking points. Garin ended a three-match losing trend by decisively defeating Australian qualifier Jason Kubler in his first-round encounter in Stockholm, 6-2, 6-4.

Cristian Garin is down 1-0 to Holger Rune in the head-to-head matchup. The two faced up in the 2022 Serbia Open earlier this year, where the Dane won 6-3, 6-1 in the opening round.

Due to the players’ erratic performances, there are no obvious favourites. Garin, though, is still getting used to the competition and is probably going to lose to the tenacious kid.