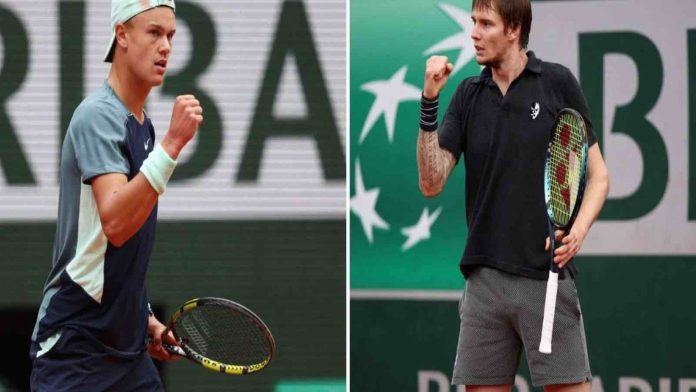 On Friday, Holger Rune and Alexander Bublik will square off in the 2022 Moselle Open quarterfinals.

Rune faced Benjamin Bonzi in the second round after receiving a bye in the first round. The young man got off to a fast start, scoring a break to go up 3-1. This gap was too great for the French player to overcome, as his opponent went on to win the opening set with relative ease. Rune maintained his high calibre of play as he twice broke Bonzi’s serve to take a 4-1 lead in the second set. The 26-year-old, however, got injured following this and was forced to quit. The Dane prevailed 6-4, 4-1, ret. to go to the round of eight.

In the opening round of the Moselle Open, Alexander Bublik defeated Evan Furness in a gruelling three-set match. The World No. 51 Emil Ruusuvuori was his opponent in the second round. In order to take a 5-4 lead in the first set, Bublik broke in the ninth game. In the ensuing tie-break, the 23-year-old ultimately prevailed to win the set. In the deciding set, Bublik raced out to a 4-1 lead and held on to win 6-7(4), 6-4, 6-3.

Due to Rune’s poor recent performance, this is a fantastic chance for him to record a successful outcome. But indoor hardcourts are a great place for Bublik’s game to flourish. He has already achieved success on the surface this year, and he has previously advanced to another final. The Kazakh should outperform his younger opponent in strength.

Prediction: Bublik to win in 3