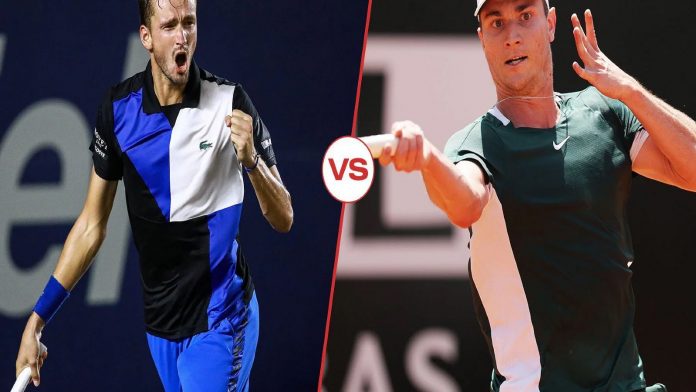 World No. 1 Daniil Medvedev will take on fourth seed Miomir Kecmanovic in the semifinals of the 2022 Los Cabos Open on Friday.

After receiving a bye in the opening round, Medvedev faced qualifier Rinky Hijikata. The victory over the Australian was his 250th of his career and came by scores of 6-4, 6-3. In the quarterfinals, the first seed took on Ricardas Berankis. The first set was shortly in Medvedev’s grasp after he won the next five games in a row to win the set. In the second set, the Russian jumped out to a 4-0 advantage that Berankis was unable to overcome. The World No. 1 quickly ended the game to secure a straightforward 6-2, 6-2 triumph. He now has 200 victories on hard courts.

After receiving a bye in the first round, Miomir Kecmanovic defeated Jordan Thompson in straight sets to progress to the quarterfinals. He faced Brandon Nakashima, who finished second in this competition in 2021. With ease, the Serb served out the set to win the first game. At the beginning of the second set, Kecmanovic took a break to go up 2-0, but Nakashima rallied back and won the following few games to tie the match. The Serb, however, managed to break serve once more and held onto his lead this round. He had to save a break chance, but he was able to end the match with a 6-2, 6-4 victory and move on to his second semifinal of the year.

Medvedev leads Kecmanovic 1-0 in the head-to-head. He won their most recent encounter at this year’s French Open in straight sets.

Since it’s difficult to get past Medvedev, Kecmanovic will occasionally need to participate in lengthy rallies. Even though the Serb will need to play aggressively, simply trying to overwhelm his opponent won’t work. The Russian is particularly adept at handling heavy hitters.

Kecmanovic will have to defeat one of the top players on the floor in order to advance to his first hardcourt final. Despite the Serb’s greatest season to date, Medvedev’s track record makes it difficult to not choose him to win.