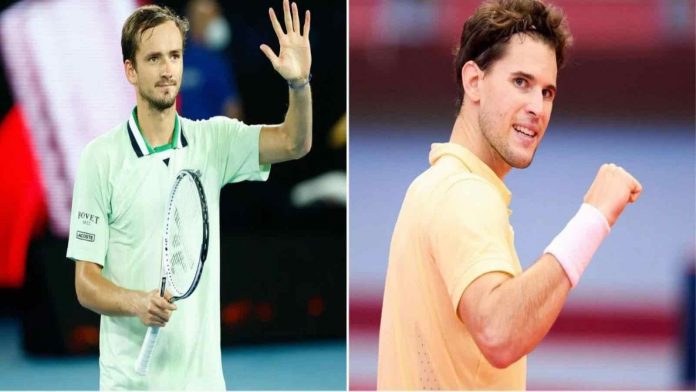 On Thursday, the second round of the 2022 Erste Bank Open will feature a highly anticipated encounter between Daniil Medvedev and Dominic Thiem.

In order to heal from an injury and spend time with his family after the birth of his first child, Medvedev took a brief break from the tour. In Vienna, where he was back on the circuit, he faced Nikoloz Basilashvili in the opening round. In the first set, the Russian took an early lead by going up 3-0 and earning a break. Near the end of the set, Medvedev was able to break Basilashvili’s serve once more to win it. In the second set, he maintained the pace by breaking serve to lead 3-1. Later, when the score was 5-2 and Basilashvili was serving to stay in the game, the former World No. 1 broke his opponent’s serve once more to win 6-2, 6-2.

Tommy Paul was Thiem’s opponent in the opening round. To take a 4-0 lead in the first set, the American twice broke the former US Open champion’s serve. He kept up his strong play and eventually succeeded in winning the set. In the second set, both players had a few break point opportunities, but Thiem prevailed in the ensuing tie-break to win the set and force a third set. In the decisive set, Thiem came back on serve after Paul had a 3-0 lead. The Austrian saved a few match points to win the tie-break and the set, as well as the match, 2-6, 7-6 (2), 7-6. (6).

In their previous five encounters, Thiem held a 3-2 advantage over Medvedev. In the 2020 ATP Finals, the Russian prevailed in their prior match in three sets.

Because of his ability to control Thiem’s enormous backhand, the former world number one rarely finds himself on the defensive. Additionally, Medvedev has the advantage when it comes to serving, which will probably give him some extra points. Even if Thiem has made some good strides lately, the Russian should be able to find a way to triumph.

Prediction: Medvedev to win in 3