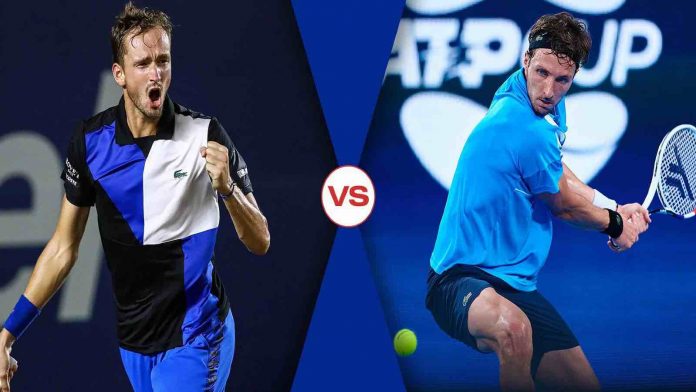 Top seed Daniil Medvedev will take on Frenchman Arthur Rinderknech in the second round of the 2022 US Open on Wednesday,

In the first round, Medvedev easily defeated American Stefan Kozlov, winning 6-2, 6-4, 6-0. The Russian first struggled to adjust to his opponent’s unconventional style, but he quickly found his footing. Despite considerable resistance from Kozlov in the second set, Medvedev capitalised on his opportunity by winning the final eight games of the match.

In the opening round, Arthur Rinderknech faced off against his countryman Quentin Halys. The World No. 58 dropped the opening set but improved afterward to triumph 4-6, 7-6(4), 6-3, 6-2. To challenge the No. 1 in the world, Rinderknech will have to play to the limit. He had a strong run up to the US Open, making it to the final of the ATP Challenger Granby in Canada.

The duo have never faced each other on the tour, so their head-to-head currently stands at 0-0.

This match-up will favor Medvedev as he prefers playing against more defensive-minded opponents. The Russian has no problem being patient before pouncing when the opportunity arises.