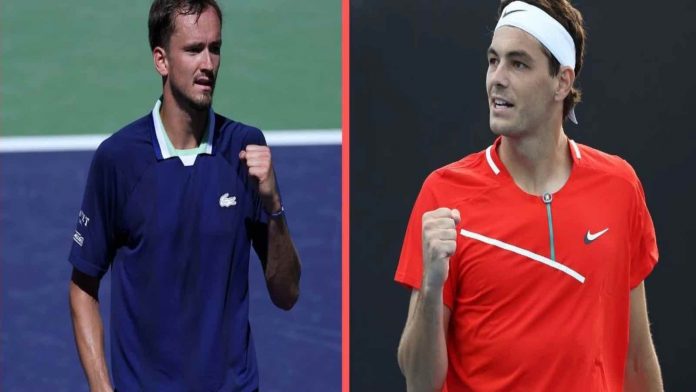 World No. 1 Daniil Medvedev will take on 11th seed Taylor Fritz in the quarterfinals on Friday.

Despite rising to the top of the world rankings, Medvedev has not had a particularly successful year. He has only only won one title, and it was most recently in Mexico’s Los Cabos. Additionally, he advanced to the Australian Open, Halle Open, and Libema Open finals. In his first two games at Cincinnati, Medvedev has displayed excellent play. In a competitive match, he defeated Botic van de Zandschlup 6-4, 7-5, and Shapavalov 7-5, 7-5 by playing with precision.

Meanwhile, Fritz is having the finest tour season of his career. The American has won two awards (Indian Wells and Eastbourne). In Cincinnati, Fritz has maintained his excellent performance. In the first two rounds, he defeated Nick Kyrgios and Sebastian Baez in straight sets. In the third round, he had to fight hard against sixth seed Andrey Rublev. The American improved after dropping the first set in a tie-break, winning the next two sets and the match 6-7(4), 6-2, 7-5.

Their head-to-head currently stands at 0-0.

Fritz has played exceptional tennis this season, which was evident in his performances against Baez and Kyrgios. His win against Rublev proved that he can grind it out when needed. A lot will depend on who serves better on the day, but Medvedev seems to be hitting top gear ahead of the US Open and will believe he can overcome the gritty American.

Prediction: Medvedev to win in 3 sets