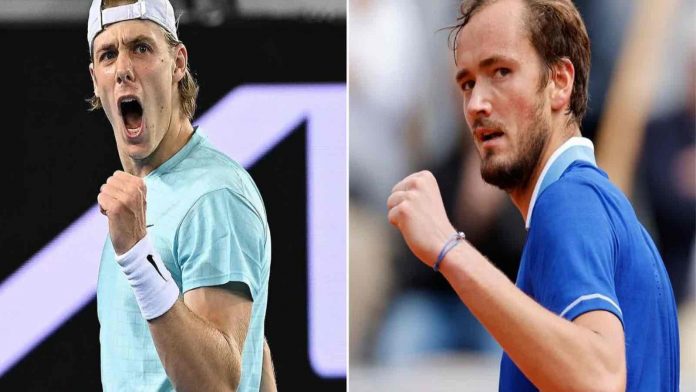 World No. 1 Daniil Medvedev will face Denis Shapovalov in the third round of the Cincinnati Open on Thursday.

As a result of losing to Nick Kyrgios in his initial match in Montreal, Medvedev entered the competition. After that, he had some luck, defeating the tenacious Botic van de Zandschulp 6-4, 7-5 in Cincinnati’s second round. The 26-year-old, who had not yet claimed a championship this year, advanced to the Mexican Open quarterfinals before suffering yet another defeat at the hands of the Spaniard. Later, he reached the Miami Open and Mallorca Open quarterfinals. He also advanced to the finals of the Libema Open and Halle Open, but only the Los Cabos Open—where he defeated Cameron Norrie 7-5, 6-0—did he succeed in winning the championship.

Shapovalov, on the other hand, has experienced a significant decline in the rankings. The Canadian, who was ranked World No. 12 earlier in the year, is currently ranked 21st. In his 36 games this season, he has only managed to win 19 of them. Shapovalov arrived in Cincinnati after suffering a disappointing first-round loss to Alex de Minaur at home. With wins against Tommy Paul and Grigor Dimitrov in the first and second rounds, he appears to be settling in the USA.

Medvedev and Shapovalov are tied at 2-2 in their head-to-head.

The upcoming contest doesn’t have a clear favorite since the duo have had moments of doubt in their respective recent clashes. However, Medvedev should be able to bank on his experience to get through to the quarterfinals.