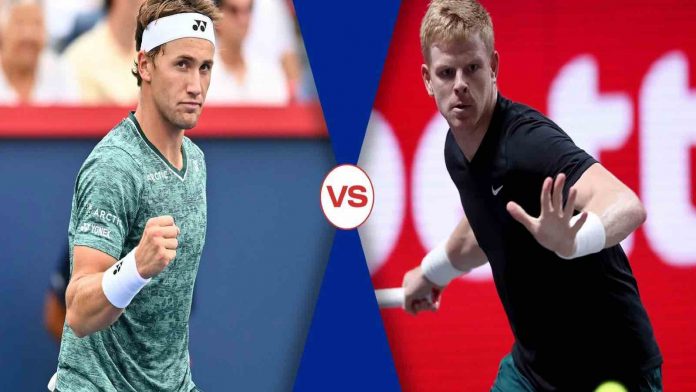 Fifth seed Casper Ruud will take on Britain’s Kyle Edmund in the first round of the 2022 US Open on Monday.’

Ruud began his campaign at the ATP Cup, but he was unable to help Norway advance through the group round. Due to his injury, he was unable to participate in the Australian Open. At the Argentina Open, he won his seventh championship of his career. Ruud was eliminated in the third round at Indian Wells, but advanced to the Miami final where he was defeated by Carlos Alcaraz. Rafael Nadal defeated him in straight sets in the French Open final, which marked his first appearance in a Grand Slam. After that, he won the Swiss Open and added another clay victory to his resume. The Norwegian later advanced to the Canadian Open semifinals before losing to Ben Shelton in the opening round of the Western & Southern Open.

Due to an injury, yle Edmund missed the full 2021 season. He made his comeback at Wimbledon this year, where he took part in the mixed doubles competition. He paired up with his countrywoman Olivia Nicholls, but they lost in the first round. Later, Edmund took part in a Challenger competition and advanced to the second round. The Citi Open served as his return’s first ATP event. After defeating Yosuke Watanuki in the opening round, he was defeated by Dan Evans. The Winston-Salem Open was Edmund’s most recent competition, and he once again lost there in the second round.

The two have not faced off prior to this, so the head-to-head stands at 0-0 for now.

Edmund is still miles away from where to needs to be to challenge top players. While Ruud did suffer a shock loss in Cincinnati, his US Open campaign should begin without a hitch.