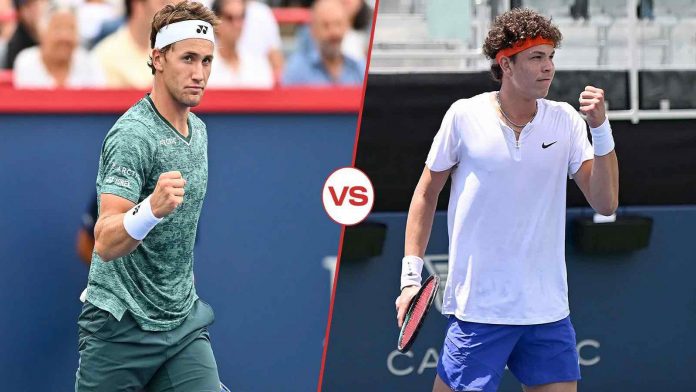 Wednesday’s second round of the 2022 Western & Southern Open will pit Casper Ruud against hometown favourite Ben Shelton after he received a bye in the opening round.

Ruud’s trip through North America on hard courts got off to a strong start when he advanced to the Canadian Open semifinals last week. After receiving a bye in the first round, he defeated Alex Molcan in straight sets. In the quarterfinals, he defeated Felix Auger-Aliassime with ease, losing just three games. It was his first time competing in Canada’s final four. In the semifinals, Hubert Hurkacz faced off against Ruud. He won the first set, which was hotly contested, but ultimately fell in three sets. In Cincinnati last year, the Norwegian advanced to the quarterfinals after suffering back-to-back first-round losses. This time, he’ll try to outperform that performance.

Ben Shelton made his ATP main draw debut a few weeks ago at the Atlanta Open. He earned his first ATP victory after defeating Ramkumar Ramanathan in the opening round. Shelton then nearly upset John Isner, the reigning champion, in the second round before falling in three sets. At the Challenger level in Chicago last week, he advanced to his second final but fell to Roman Safiullin in three sets. The American was then given a wildcard so that he could play in Cincinnati, where his first-round opponent was Lorenzo Sonego. Shelton won the closely contested first set, but Sonego evened the score by taking the second set. In the decisive set, both players battled hard, but the Italian gave way under pressure near the conclusion.

The two have not played against each other prior to this, so the head-to-head stands at 0-0

Meanwhile, Ruud has just changed his game and it seems to be working out rather well. He has smoothed down his backhand and is now striking the ball somewhat earlier. His forehand is still reliable, and the Norwegian has made significant strides on hardcourts during the past year. Although Shelton undoubtedly possesses the means to trouble his opponent, expect Ruud to prevail in this contest.