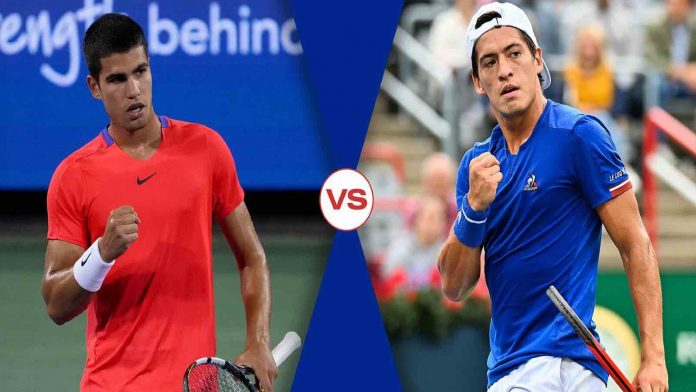 Teen sensation Carlos Alcaraz will lock horns with Sebastian Baez in the first round of the 2022 US Open on Tuesday.

This season, Alcaraz has been among the best players. While he lost early at the Australian Open, he went on to win the Rio Open, his second career championship. The Miami Open was where Alcaraz later won his first Masters 1000 championship. The Spaniard won consecutive championships in Madrid and Barcelona. In the French Open quarterfinals, his winning run was snapped. Alcaraz advanced to the fourth round of Wimbledon before placing second in back-to-back competitions in Hamburg and Umag. In the second round of the Canadian Open, Tommy Paul awed him. The young man bounced back and advanced to Cincinnati’s quarterfinals, where he was defeated by Cameron Norrie. Alcaraz leads the tour with 44 victories so far this year.

The current season for Sebastian Baez is one of the best of his career. This year was his first time participating in the Majors, and he advanced to the second round in all three of them. He will now make his New York debut. Baez has advanced to three ATP finals this year outside of the Grand Slams, all of which have been played on clay. At the Chile Open and the Swedish Open, he came in second place, but at the Estoril Open, he won his first ATP championship. By defeating Andrey Rublev at the Swedish Open, the Argentinean achieved his first victory over a member of the top-10. Beaz’s performances this year have elevated him to a career-high position of No. 31 in the world.

Alcaraz leads Baez 1-0 in the head-to-head. He won their previous encounter at the 2021 ATP Next Gen Finals.

Alcaraz is also extremely capable of engaging in protracted rallies of combat, but he also knows when to turn the intensity up. Even when in a disadvantageous position, the Spaniard can produce magnificent winners. He has superb hands at the net and his drop shots are highly effective. He has a significant edge due to his court coverage. Alcaraz could breeze through to the next round given their previous performance and form.