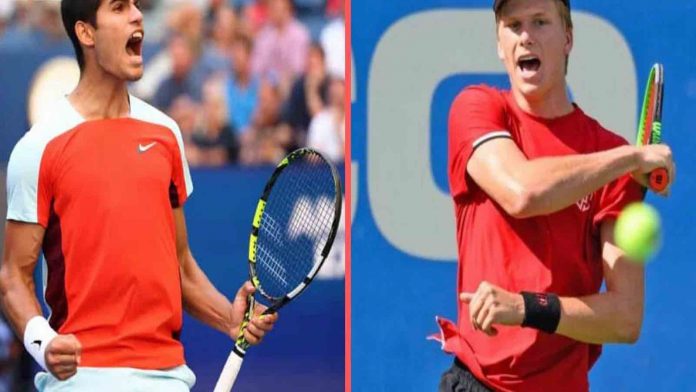 Third seed Carlos Alcaraz will take on Jenson Brooksby in the third round of the US Open on Saturday.

Alcaraz, who is currently ranked fourth in the world, has had a successful season. This season, the 19-year-old has four trophies in his possession. At the Rio Open, he defeated Diego Schwartzman in the championship match to claim his first clay-court victory of the year. At the Miami Open, Alcaraz won his second championship and first on a hardcourt. He won the Barcelona and Madrid tournaments with a flawless Spanish swing on clay. Alcaraz, though, has now lost some of his previous form. In the second round of the Canadian Open, he was defeated by Tommy Paul. Alcaraz’s Cincinnati Open journey came to an end in the quarterfinals when Cameron Norrie beat him.

While Brooksby’s season hasn’t been particularly impressive thus far. So far, the American has triumphed in 21 of the 37 games. With a semi-final showing at the Columbus ATP Challenger, Brooksby began his season. He continued to gain ground at the Dallas Open, where he came in second place to Reilly Opelka. Brooksby reached the fourth round in Indian Wells and Miami after losing in the first round of the Acapulco Open. The World No. 43 advanced to the Atlanta Open final for the second time this year. However, Alex de Minaur put an end to his remarkable run by defeating him 6-3, 6-3.

The pair are yet to face each other, so their head-to-head is tied at 0-0.

Considering his standing and record of success, Alcaraz will start as the clear favourite. The Spaniard’s serve has been problematic, despite him not dropping a set in his previous encounters. To easily advance to the fourth round, he must reduce the number of double errors he commits.