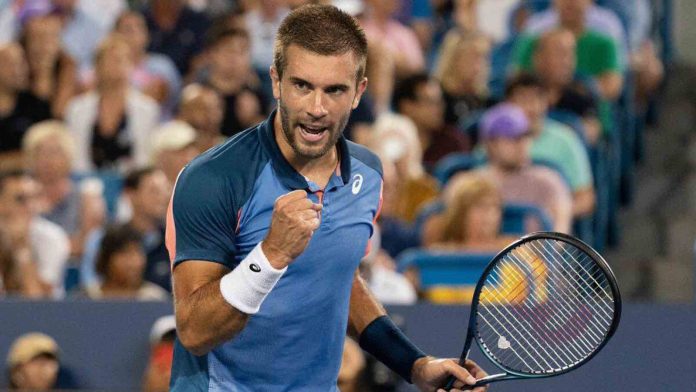 On Monday, September 26, the 2022 Korea Open’s first round will feature Borna Coric of Croatia, the number six seed, taking on Radu Albot of Moldova.

Borna Coric might have his best season ever throughout what started off as a slow-burning season. It is important to remember that at this point in the previous season, Coric was nursing a surgically repaired shoulder, and the road to complete recovery appeared to be just as long. The Croat defeated five seeded players en way to winning the Cincinnati Masters, his first tour-level victory in four years and certainly the biggest of the bunch. After that performance, Coric rose more than 100 spots in the rankings and earned a seeded position at the US Open. But at Flushing Meadows, it seemed the physical toll was too much to bear as the Croat, ranked World No. 26, lost in straight sets to Jenson Brooksby in the second round.

This past week, Radu Albot, 32, won his tenth career championship at the Istanbul Challenger, bringing him back into the top 100 for the first time in nearly a year. In Turkey’s second city, Albot was one step ahead of the competition, scraping through a few three-set matches before destroying the big-serving Lukas Rosol 6-2, 6-0 in the championship match. Just one week after winning the title in Istanbul, it will be interesting to watch if he can swiftly regain his form on the hard courts of Seoul. The Moldovan, who has a season record of 34-25, will try to earn his first top-30 victory of the year.

We should give Coric the benefit of the doubt because he was gassed at the US Open. Expect the Croatian to easily surpass the 92-ranked Moldovan.