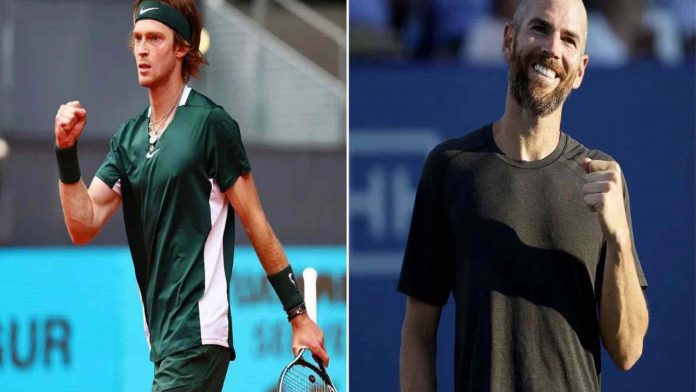 On Friday, the fifth-seeded Andrey Rublev and the World No. 51 Adrian Mannarino will square off in the 2022 Astana Open quarterfinals.

Rublev advanced to the second round and faced qualifier Zhang Zhizhen after defeating Laslo Djere 6-4, 6-3. The Russian took an early lead, going 3-0. He maintained the lead all the way to the conclusion. At 5-3, he stood up to serve for the set, and after avoiding three break points, he was able to win it. In the second set, Rublev got out to a quick lead, taking it 3-1. The World No. 9 easily won the next three games of the match to win the match 6-3, 6-2 after Zhizhen held serve. His 11th quarterfinal of the year is now in reach.

Stan Wawrinka was defeated by Adrian Mannarino in the opening round. In the second, David Goffin was his opponent. The first set was quickly won by Goffin, who went up 3-0. The Belgian quickly came up to serve for the opening set, and on his third set point, he was successful in winning it. In the second set, Mannarino changed the course of events. He twice broke his opponent’s serve to win the set and force a tiebreaker. In the ninth game of the set, Mannarino earned the crucial break to make the score 5-4. To tie the score at 5-5, Goffin was able to break his serve. The Frenchman then made another break and finished the match on his second try to record a comeback victory of 3-6, 6-1, 7-5.

The two have a 1-1 head-to-head tie after splitting their previous two matchups. At the Kremlin Cup in 2021, Mannarino triumphed in their previous match in three sets.

Despite the fact that Mannarino has had success staging comebacks in the past, he might not be able to do so against the Russian. Rublev has been displaying some good form this week, so if he can get a solid lead, he won’t likely blow it. Expect the No. 9 in the world to keep up the fight in Astana.