The SportsLiteSports at just one click!
HomeTennisAlexander Bublik welcomes his first child just before pinning down the U.S...
Tennis

Alexander Bublik welcomes his first child just before pinning down the U.S Open

World No 47, Alexander Bublik became father to his son, Vasily. 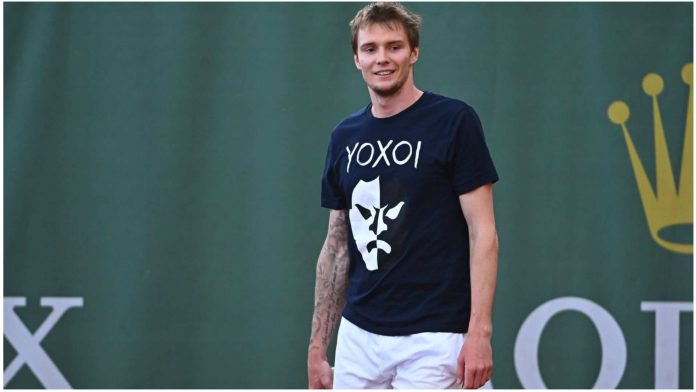 The 25-year-old Alexander Bublik becomes father for the first time on August 16. World No. 47 is set to play in the season-end Grand Slam. But is just being too delighted with a new chapter of life. Alexander Bublik welcomes his first child just before pinning down the U.S Open.

Check: Who is Alexander Bublik Girlfriend? Know All About His Relationship Status

On August 16, her wife gave birth to their son, Vasily. The couple is more than delighted of becoming parents for the first time. Just before having a son, Bublik toured Canada, to compete in the Montreal Open 2022. However, with a disappointing performance, he lost in the early round (Round of 64) to Brooksby. Further, he wanted to engage in the Cincinnati and Winston-Salem Open but Bublik got better things to deal with. Bublik left for Atlantic, where her pregnant wife bear their son, Vasily.

You don’t really think about a Grand Slam when you’re having a baby, We’re getting used to the new chapter of our life.

The Kazakh made impressive progress early this year defeating Alexander Zverev to lift his first title this year at Montpellier. Further, Bublik made it to his career high, entering the top 30 in the first week of February. The same week, he helped Kazakhastan to win the Davis Cup with a victorious win over Casper Ruud- pushing the Norway team to the edge.

Alexander Bublik is a little less socialistic on social media platforms, he hasn’t shared any family pictures with his fan. However, he confessed about his wife’s pregnancy period and his feeling about the new change in his life. “I want just to be the best for him. So that’s the only thing I care about around this moment because it really changes the life,” he adds. “It’s like he just turned the page. All the problems you think you had, just disappear. You don’t really think about anything else.”

Bublik will be anticipating the Basel Open, the reason stands to be him playing against Roger as he wants to see him play once again.