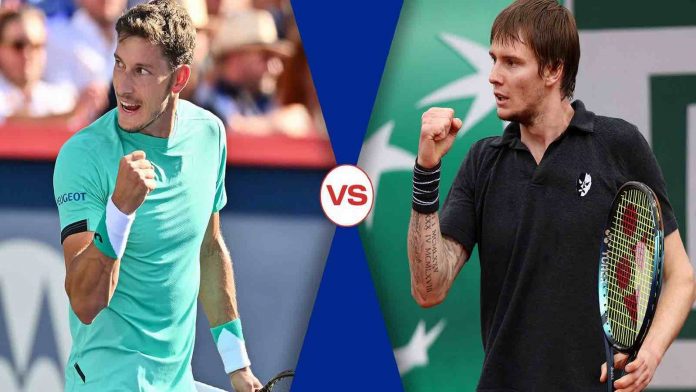 Twelfth seed Pablo Carreno Busta will take on Alexander Bublik in the second round of the US Open on Wednesday.

In the weeks leading up to the year’s last Grand Slam, Carreno Busta has been in excellent shape. In Montreal, he defeated competitors like Hubert Hurkacz and Jannik Sinner to win his first Masters 1000 championship. This season, the Spaniard has a record of 29 victories and 18 loses. In the first round at Flushing Meadows, he faced off against Dominic Thiem, the 2020 US Open champion. Despite having a poor start to the match and losing an early break, Carreno Busta came back to win the first set 7-5. He won the second set handily, but his defeat in the third gave Thiem some hope. He bounced back in time to win the match 7-5, 6-1, 5-7, 6-3.

Hugo Gaston was Bublik’s opponent in a challenging first-round match. The Frenchman is renowned for his unconventional playing approach, which includes several slices and drop shots. However, the Kazakh was decisive throughout the contest and defeated Gaston 6-4, 6-4, 6-4.

The duo have faced off three times on the tour, with Carreno Busta leading the head-to-head 3-0.

One of the men’s tour’s most erratic players is Bublik. He like Flushing Meadows’ rapid courts and possesses a strong serve. In the first round, he displayed his serving power by smashing 13 aces and winning 77% of the points on his first serve. The duel will match the stable Spaniard and the volatile Kazakh, two players with drastically different playing philosophies. There’s a chance for a competitive game, but Carreno Busta should prevail in the end.

Prediction: Pablo Carreno to win in 4