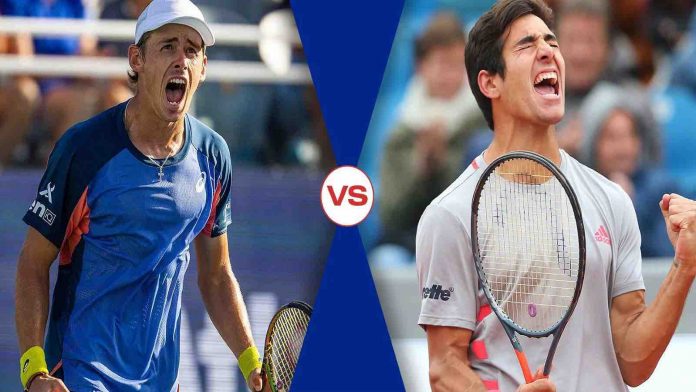 In a rematch of the fourth round at Wimbledon, 18th seed Alex de Minaur will square off against Cristian Garin in the second round of the US Open on Wednesday.

At the US Open, Alex de Minaur defeated Filip Krajinovic in the opening round. The Australian defeated the Serbian with ease, winning 7-5, 6-2, and 6-3. De Minaur’s season has been alright. He has tallied 36 victories and 19 defeats. De Minaur just won the Atlanta Open, giving him a total of six victories this year. In three ATP tournaments, the Barcelona Open, Lyon Open, and Eastbourne International, he also advanced to the semifinals. He also participated in the Rotterdam Open quarterfinals. The 23-year-old advanced to Wimbledon’s and the Australian Open’s fourth rounds. He was defeated at Wimbledon by Cristian Garin in a match that was decided by a slim margin.

While this is happening, Cristian Garin hasn’t had the best season. He has a record of 17 victories and 18 defeats. The Chilean had a difficult year and had to think twice about continuing his tennis career due to numerous setbacks and a shoulder ailment. However, the 26-year-old advanced to the ATP Houston semifinals and the Rome Masters quarterfinals. Additionally, Garin defeated Alex de Minaur 2-6, 5-7, 7-6(3), 6-4, 7-6(6) in the decisive tie-break at Wimbledon this year to get to his first Grand Slam quarterfinal. The Chilean defeated the Czech Jiri Lehecka in the first round of the US Open in four sets, going 3-6, 7-6(3), 7-5, and 6-1.

De Minaur will look to settle the score in his favor after a painful defeat at Wimbledon, and should pull through this time around.

Prediction: de Minaur to win in 4