The SportsLiteSports at just one click!
HomeKabaddiPardeep Narwal Net worth, Salary, and everything You need to know
KabaddiNet WorthPro Kabaddi League

Pardeep Narwal Net worth, Salary, and everything You need to know 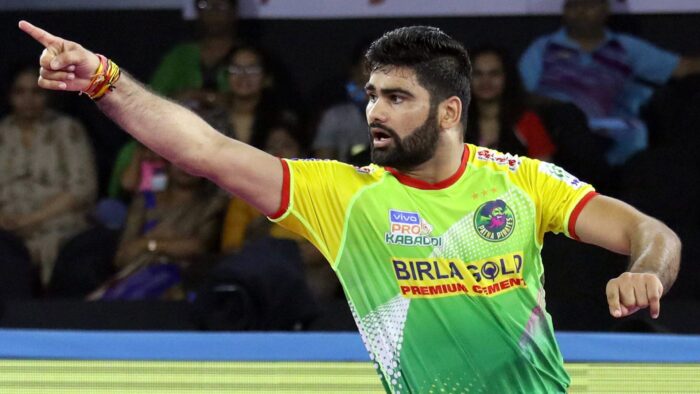 Pardeep Narwal is an Indian kabaddi player who currently plays for UP Yoddha in the Pro Kabaddi League. Pardeep is one of the most famous and consistent players in the league. He holds a multitude of the league’s records and is currently the highest raid-point scorer in league history. Here are a few details about Pardeep Narwal like his net worth, etc. which you need to know.

Narwal made his debut in VIVO Pro Kabaddi League in season two. He represented the Bengaluru Bulls against the Patna Pirates. In the next season, he shifted to Patna Pirates and blossomed into one of the best raiders in the league. Pardeep is a regular player for the Indian kabaddi team since 2016. He has won gold in three of the four tournaments that he has played in.

Narwal is known to be one of the most expensive kabaddi players in the league. According to recent reports, his net worth is allegedly over 10 crores. He received an amount of INR 60,50,000 for the sixth season of PKL. He was also roped in for a handsome amount of INR 1.96 crores in the eighth season of the Pro Kabaddi League.

The Dubki king was the most promising player in the Patna Pirates team. In season three when he first joined the squad his salary was INR 20 lakhs. After his performance, his salary was increased to INR 55 lakh. In season 6 they paid them INR 60.5 lakh. Currently, he is being paid INR 1.96 crore by UP Yodhha. It is also known that Pardeep only earns from the Kabaddi leagues. He does not indulge in any endorsements or have income from any extra source.

Following are the achievements of Pardeep so far.