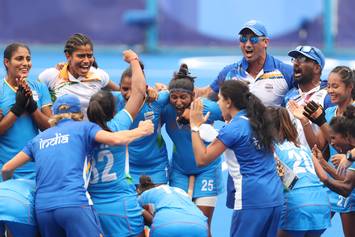 The Indian women’s hockey team registered one of its biggest wins in history with as they defeated Australia 1-0 to reach their maiden semifinals in women’s hockey at the Olympics in Tokyo.

Gurjit Kaur proved to be India’s hero as she scored her maiden Olympic goal in the 22nd minute to put India in the last-4 of the Tokyo Games where they will face either Argentina, Netherlands, New Zealand, Spain or Great Britain. Gurjit scored through a penalty corner, a first for India in this Olympics and the first conceded through a PC by the Hockeyroos. India somehow managed to hold on to their lead from there onwards, denying wave after wave of attacks from Australia to complete a hat-trick of wins. Argentina beat Germany 3-0 in the first quarterfinal on Monday.

India managed to save a whopping 8 penalty corners while converted the only one that they got in the match to register one of the most famous wins in Olympic history. This is India’s third win in this Olympic campaign after Ireland (1-0) and South Africa (4-3). They had opened their campaign with three successive defeats against the Netherlands (1-5), Germany (0-2) and Great Britain (1-4).

This is India’s biggest win in women’s hockey as the team is playing in the Olympics only for the third time and had struggled to the knockout rounds, finishing fourth in Pool A. 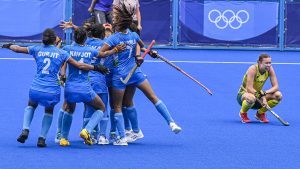 The Indian women hockey team’s best finish at the Olympics came on debut in Moscow back in 1980 when they ended fourth in the six-team competition.

Earlier on Sunday, the Indian men’s team also reached their first-ever semi-final at the Olympics after registering a stunning Great Britain 3-1 in the quarterfinal. India will take on world champions Belgium in the semifinal on Tuesday.