Venezuela’s Yulimar Rojas shattered the long-held women’s world record in the triple jump as she secured Olympic gold at Tokyo 2020. Rojas produced a stunning leap of 15.67 metres with her final attempt in the final at the Olympic Stadium.

She had already been confirmed as bettering the silver medal she won five years ago in Rio de Janeiro, but screamed her delight as her distance was revealed. Rojas had pushed the record of Inessa Kravets throughout the competition. 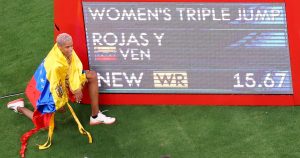 Her opening jump was just nine centimetres shy of Kravets’ 15.50m record, set at the World Championships in Gothenburg in 1995.

That would have been comfortably long enough to secure a gold she had long craved, but the Venezuelan saved her best for last to write her name into the record books. 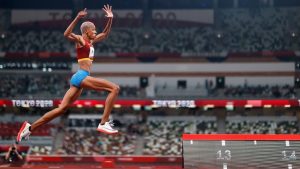 Patricia Mamona of Portugal took silver with a 15.01 metre leap, while Ana Peleteiro jumped 14.87 metres to secure a bronze medal for Spain. It appeared that Rojas might even be able to push further – her second phase, the step, appeared contracted after an enormous opening hop.

The two-time world champion nonetheless flew over the sand, crashing down to make history at Tokyo 2020.

Both Mamona and Peleteiro set national records, but proved unable to match the brilliant South American.